He, She and It: A Novel (Mass Market) 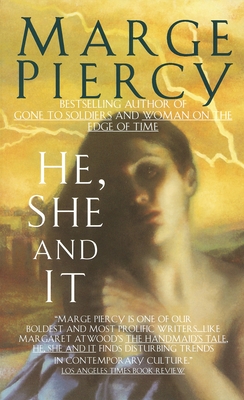 He, She and It: A Novel (Mass Market)


Available from Our Distributor (Not in Store)
"A triumph of the imagination. Rich, complex, impossible to put down."—Alice Hoffman

In the middle of the twenty-first century, life as we know it has changed for all time. Shira Shipman's marriage has broken up, and her young son has been taken from her by the corporation that runs her zone, so she has returned to Tikva, the Jewish free town where she grew up. There, she is welcomed by Malkah, the brilliant grandmother who raised her, and meets an extraordinary man who is not a man at all, but a unique cyborg implanted with intelligence, emotions—and the ability to kill. . . .

From the imagination of Marge Piercy comes yet another stunning novel of morality and courage, a bold adventure of women, men, and the world of tomorrow.
Marge Piercy has written seventeen novels including the New York Times bestseller Gone to Soldiers, the national bestsellers Braided Lives and The Longings of Women, and the classic Woman on the Edge of Time, as well as He, She and It and Sex Wars; nineteen volumes of poetry including The Hunger Moon: New and Selected Poems 1980–2010, The Crooked Inheritance, and Made in Detroit; and the critically acclaimed memoir Sleeping with Cats. Born in center city Detroit, educated at the University of Michigan and Northwestern, and the recipient of four honorary doctorates, Piercy is active in antiwar, feminist, and environmental causes.