The Night Before Valentine's Day (Paperback) 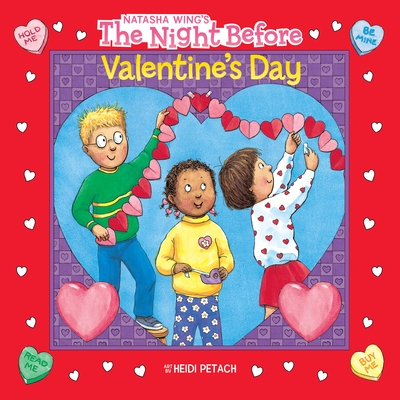 The Night Before Valentine's Day (Paperback)


Email for availability
It's the sweetest holiday of the year! Celebrate love and Valentine's Day with card-making, tasty treats, and more in this installment of Natasha Wing's best-selling series.

Join in on all of the colorful fun, and then come along to school the next morning for a day of parties and games!
Natasha Wing was born in Milford, Connecticut, in 1960. At the age of 20 she moved to Arizona where she finished college at Arizona State University in 1982 with a BS in advertising. In 1991 she decided to write children’s books. She sold her first book, Hippity Hop, Frog on Top, within six months and has been writing children’s books and articles ever since. The Night Before series began with The Night Before Easter and has grown into a best-selling series of more than 20 titles. She lives in Fort Collins, Colorado.

Heidi Petach has enjoyed a number of unusual careers on her way to becoming a bestselling illustrator and author. With a master’s degree with highest distinction from Indiana University School of Music, Heidi initially launched a career as a concert pianist and composer. She played concerts around the world, was featured on TV and radio, made recordings, and was commissioned to compose solo piano, piano/organ, and orchestral works. Following her music career, Petach worked in Promotions and Special Events at the Cincinnati Zoo. Her continuing love of animals is evident in all her books. Creating the artwork for the Zoo’s brochures and flyers inspired her to enroll full-time at the Cincinnati Academy of Design. A tip from a neighbor connected Heidi with a local publisher and she released her first children’s picture book. Contracts with major publishers, including Grosset & Dunlap and Putnam, soon followed. Petach’s books have received glowing reviews and have been nominated for awards. The Night Before Valentine’s Day by Natasha Wing appeared on the New York Times children’s books bestsellers list for five weeks running.