The Cat Who Walks through Walls (Mass Market) 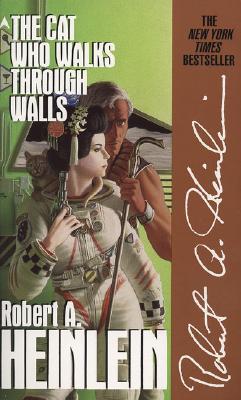 The Cat Who Walks through Walls (Mass Market)

By Robert A. Heinlein


Email for availability
A fast-paced, science fiction romp through multiple universes from the bestselling author of Starship Troopers and Stranger in a Strange Land.

“[Heinlein] is, if possible, a greater genius than ever before...this time by giving us a thinking man’s Hitchhiker’s Guide to the Galaxy.”—San Francisco Chronicle

Dr. Richard Ames is an ex-military man, a sometime writer, and unfortunate victim of mistaken identity. When a stranger attempting to deliver a cryptic message is shot dead at his dinner table, Ames is thrown headfirst into danger, intrigue, and other dimensions where Lazarus Long still thrives, where Jubal Harshaw lives surrounded by beautiful women, and where a daring plot to rescue the sentient computer called Mike could change the direction of all human history.


Robert Anson Heinlein was born in Missouri in 1907, and was raised there. He graduated from the U.S. Naval Academy in 1929, but was forced by illness to retire from the Navy in 1934. He settled in California and over the next five years held a variety of jobs while doing post-graduate work in mathematics and physics at the University of California. In 1939 he sold his first science fiction story to Astounding magazine and soon devoted himself to the genre.

He was a four-time winner of the Hugo Award for his novels Stranger in a Strange Land (1961), Starship Troopers (1959), Double Star (1956), and The Moon is a Harsh Mistress (1966). His Future History series, incorporating both short stories and novels, was first mapped out in 1941. The series charts the social, political, and technological changes shaping human society from the present through several centuries into the future.

Robert A. Heinlein’s books were among the first works of science fiction to reach bestseller status in both hardcover and paperback. he continued to work into his eighties, and his work never ceased to amaze, to entertain, and to generate controversy. By the time he died, in 1988, it was evident that he was one of the formative talents of science fiction: a writer whose unique vision, unflagging energy, and persistence, over the course of five decades, made a great impact on the American mind.

“Dialogue as witty as Oscar Wilde’s, action as rollicking as Edgar Rice Burrough’s, and satire as spicy as Jonathan Swift’s.”—The New York Times

“Irresistible...The Cat Who Walks through Walls has a force that cannot be denied.”—Locus