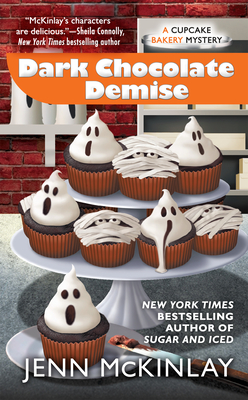 This is book number 7 in the Cupcake Bakery Mystery series.

The New York Times bestselling Cupcake Bakery Mysteries bake up sweet surprises, but as the series continues, Mel and Angie are in for a fresh batch of trouble…

Scottsdale, Arizona, may not be the liveliest place on earth, but it’s never been as dead as this. Hundreds of fans have gathered together for the first annual Old Town Zombie Walk, and Mel, Angie, and the Fairy Tale Cupcake crew are donning their best undead attire to sell some horror-themed desserts to the hungry hordes.

But the fun turns to fright when Mel finds a real dead body in a prop casket outside of the bakery’s truck—and the corpse looks alarmingly like a zombie of their own. Knowing that Joe, Angie’s brother and Mel’s former flame, has been working on a dangerous mob case, Mel worries that the murder is a hit gone wrong and that someone near and dear was the real target. To keep any of her friends from winding up six feet under, Mel will do whatever it takes to find a killer—no matter how scary things get...

The hardest decision New York Times bestselling author Jenn McKinlay ever had to make was what to major in during college. Then she discovered the sanctuary of the library and library science—a major that allowed her to study all the subjects. She loves working as a librarian. After all, what other occupation allows you to research the ethnobotanical properties of agave, perform a puppet show for twenty wiggly toddlers and try to answer why the rabbit’s foot is considered lucky, all in the same day? Jenn is also the author of the Cupcake Bakery Mysteries, the Hat Shop Mysteries and the Bluff Point romance series. She lives in Scottsdale, Arizona, in a house that is overrun with books, pets, kids and her husband’s guitars.

“Better than icing on the tastiest cupcake.”—Avery Aames, Agatha Award-winning author of the Cheese Shop mysteries

“[McKinlay’s] characters are delicious, and the dash of romance is just the icing on the cake.”—Sheila Connolly, New York Times bestselling author of An Early Wake

“Jenn McKinlay delivers all the ingredients for a winning read. Frost me another!”—Cleo Coyle, New York Times bestselling author of the Coffeehouse Mysteries

“Like a great fairytale, McKinlay transports readers into the world of cupcakes and all things sweet and frosted, minus the calories. Although…there are some pretty yummy recipes at the end.”—AnnArbor.com