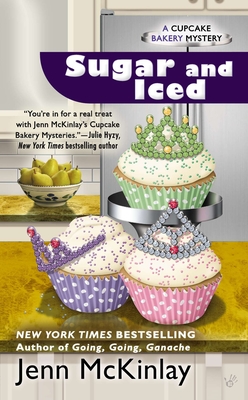 This is book number 6 in the Cupcake Bakery Mystery series.

Sugar and spice and murderous vice.
That’s what pageants are made of…

Normally Melanie Cooper and Angie DeLaura wouldn’t be caught dead at a beauty pageant, but when Mel’s mom asks them to provide cupcakes for the seventy-fifth annual Sweet Tiara contest as a favor for her best friend, they can’t say no. Plus, between cooking up a daily display for the three-day event and sponsoring a cupcake creation challenge for the participants, Fairy Tale Cupcakes will get great publicity.

But the world of pageants is even hotter than Mel’s kitchen. A high-strung judge and a pushy stage mom target Lupe, a young friend of Mel and Angie’s, at the competition and aim to take her out—by any means necessary. When the same judge shows up dead underneath Mel and Angie’s cupcake display, Lupe is crowned the lead suspect. Now Mel and Angie will have to find the real killer quickly or Lupe may be strutting the catwalk in prison pinstripes…
Jenn McKinlay has baked and frosted cupcakes into the shapes of cats, mice, and outer space aliens, to name just a few. Writing a mystery series based on one of her favorite food groups (dessert) is as enjoyable as licking the beaters, and she can’t wait to whip up the next one. She is the author of the Cupcake Bakery Mysteries, including Going, Going, Ganache, Red Velvet Revenge, Death by the Dozen, Buttercream Bump Off and Sprinkle With Murder, the Hat Shop Mysteries, including Cloche and Dagger and Death of A Mad Hatter, and the Library Lover’s Mysteries, including Read It and Weep, Book, Line, and Sinker, Due or Die, and Books Can Be Deceiving. She lives in Scottsdale, Arizona, with her family.
Praise for the Cupcake Bakery Mysteries

“Good plotting and carefully placed clues make this an enjoyable, light mystery, made a little sweeter with recipes for the cupcakes Mel’s team creates.”—The Mystery Reader