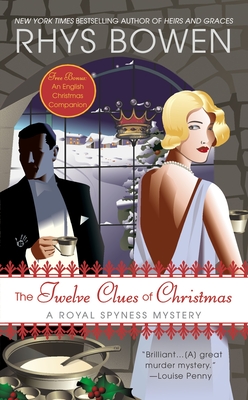 This is book number 6 in the A Royal Spyness Mystery series.

In the sixth mystery in the New York Times bestselling Royal Spyness series, Lady Georgiana Rannoch cannot wait to ring in the New Year—before a Christmas killer wrings another neck…

Scotland, 1933. While her true love, Darcy O’Mara, is spending his feliz navidad tramping around South America and her mother is holed up in a tiny village called Tiddleton-under-Lovey with droll playwright Noel Coward, Georgie is quite literally stuck at Castle Rannoch thanks to a snowstorm.

It seems like a Christmas miracle when she manages to land a position as hostess to a posh holiday party in Tiddleton. The village should be like something out of A Christmas Carol, but as soon as she arrives things take a deadly turn when a neighborhood nuisance falls out of a tree. On her second day, another so-called accident results in a death—and there’s yet another on her third, making Georgie wonder if there's something wicked happening in this winter wonderland...

Includes an English Christmas companion, full of holiday recipes, games, and more!
Rhys Bowen, a New York Times bestselling author, has been nominated for every major award in mystery writing, including the Edgar®, and has won many, including both the Agatha and Anthony awards. She is the author of the Royal Spyness Mysteries, set in 1930s London, the Molly Murphy Mysteries, set in turn-of-the-century New York, and the Constable Evans Mysteries, set in Wales. She was born in England and now divides her time between Northern California and Arizona.
Praise for the Royal Spyness Mysteries