The Mission, the Men, and Me: Lessons from a Former Delta Force Commander (Paperback) 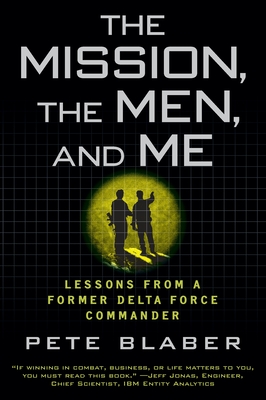 The Mission, the Men, and Me: Lessons from a Former Delta Force Commander (Paperback)

As a commander of Delta Force-the most elite counter—terrorist organization in the world—Pete Blaber took part in some of the most dangerous, controversial, and significant military and political events of our time. Now he takes his intimate knowledge of warfare—and the heart, mind, and spirit it takes to win—and moves his focus from the combat zone to civilian life.

In this book, you will learn the same lessons he learned, while experiencing what the life of a Delta Force Operator is like—from the extreme physical and psychological training to the darkest of shadow ops all around the world. From each mission, Pete Blaber has taken a life lesson back with him. You will learn these enlightening lessons as you gain insights into never-before-revealed missions executed around the globe. And when the smoke clears, you will emerge wiser, more capable, and better prepared to succeed in life than you ever thought possible.
Pete Blaber commanded at every level of Delta Force, executing vital missions across the globe including destroying the largest pocket of Al Qaeda forces to date and helping to hasten the fall of Saddam Hussein's regime in Iraq. He lives in Santa Monica, California.
Praise for The Mission, the Men, and Me

“His thesis is that there aren't that many different situations in life, and there aren't that many different ways of dealing with them—have a few, simple principles, and, when in doubt, refer to them. He’s a stoic with a sense of humor, and I very much enjoyed his book.”—David Mamet, Pulitzer Prize-winning American playwright, essayist, screenwriter, and film director

“Blaber presents his hard-won principles of leadership and illustrates them with intense personal stories and accounts of leadership amidst chaotic modern warfare. The leadership principles ring true and have a commonsense appeal. Also, the ‘peek behind the curtain’ look at Delta should please fans of special operations.”—Small Wars Journal

“Should be required reading for all flag-rank officers. Required, because it codifies in simple, accessible language the concepts that will allow us to adapt, overcome and prevail in 21st-century warfare, whether it be asymmetric in nature and unconventional in approach, or along the classical Land-War models. And required because Lt. Col. Blaber demonstrates through multiple empirical examples why flexibility, audacity, situational awareness and preparation are superior to rigid, formulaic doctrine-influenced operational planning.”—The Washington Times