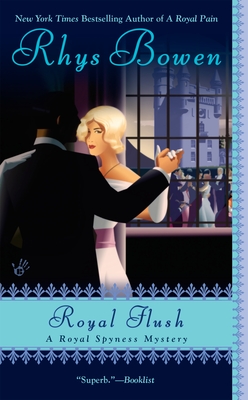 This is book number 3 in the A Royal Spyness Mystery series.

Lady Georgiana must outwit two clever hunters who are after the Prince of Wales in the third novel in the New York Times bestselling Royal Spyness Mystery series.

Scotland, 1932. Back home until a little London scandal blows over, minor royal Lady Georgiana Rannoch has two equally important objectives. Queen Mary wants Georgie to keep the divorced, American, and entirely unsuitable Wallis Simpson from seducing the Prince of Wales, while Scotland Yard wants her to stop one of the members of the shooting party at Balmoral from turning their sights from the quails to His Royal Highness...
Rhys Bowen, a New York Times bestselling author, has been nominated for every major award in mystery writing, including the Edgar®, and has won many, including both the Agatha and Anthony awards. She is the author of the Royal Spyness Mysteries, set in 1930s London, the Molly Murphy Mysteries, set in turn-of-the-century New York, and the Constable Evans Mysteries, set in Wales. She was born in England and now divides her time between Northern California and Arizona.
“Brilliant...This is so much more than a murder mystery. It’s part love story, part social commentary, part fun and part downright terrifying. And completely riveting.”—#1 New York Times bestselling author Louise Penny