Hum If You Don't Know the Words (Paperback) 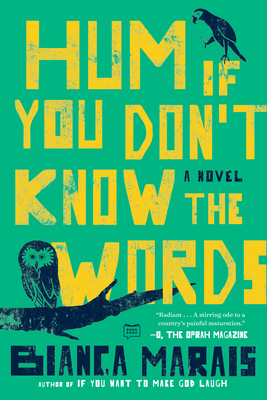 “Hum If You Don't Know the Words is a marvel. Set in South Africa in 1978, this is the story of Robin, a white child, and Beauty, a black mother, both of whom experience immense loss after the Soweto student uprising. Bianca Marais has written a book about apartheid - a book about tragedy, injustice, grief, and survival - that manages to sparkle with wit, warmth, and charming secondary characters. Readers will love this rare and rewarding gem.”
— Emilie Sommer, East City Bookshop, Washington, DC

The Secret Life of Bees set in Johannesburg, now in paperback. A perceptive and searing debut about Apartheid South Africa, as told through the story of one unique family brought together by tragedy.

Life under Apartheid has created a secure future for Robin Conrad, a nine-year-old white girl living with her parents in 1970s Johannesburg. In the same nation, but worlds apart, Beauty Mbali, a Xhosa woman in a rural village in the Bantu homeland of the Transkei, struggles to raise her children alone after her husband's death. Their meeting should never have occurred...until The Soweto Uprising, in which a protest by black students ignites racial conflict, alters the fault lines on which their society is built, leaving Robin's parents dead and Beauty's daughter missing.

In the aftermath, Beauty is hired to care for Robin, and the two forge an inextricable bond through their deep personal losses. But Robin knows that if Beauty reunites with her daughter, Robin could lose her new caretaker forever, so she makes a desperate decision with devastating consequences.

Told through Beauty and Robin's alternating perspectives, the two narratives interweave to create a rich and complex tapestry of the emotions and tensions at the heart of Apartheid South Africa. Hum If You Don't Know the Words is a beautifully rendered look at loss, racism, and the creation of family.

Bianca Marais holds a Certificate in Creative Writing from the University of Toronto's SCS, and her work has been published in World Enough and Crime. Before turning to writing, she started a corporate training company and volunteered with Cotlands, where she assisted care workers in Soweto with providing aid for HIV/AIDS orphans. Originally from South Africa, she now resides in Toronto with her husband.

Praise for Hum If You Don't Know the Words

“In this standout debut Marais handles topics such as grief and racism with a delicate intensity that will make readers fall in love with her characters. From the first few heartfelt chapters to a fast-paced and heart-wrenching ending, Marais has created a stunning historical drama that shouldn’t be missed.”—Publishers Weekly (starred review)

“Lyrical...A captivating story about finding family in unexpected places and maintaining culture in the face of adversity.”—Library Journal (starred review)

“Bianca Marais’ new novel, which was inspired by her own life, will sweep you up and not let you go until the final page.”—Bookish.com, Must Read Summer Books of 2017

“Breathtaking...Intense, powerful and moving, Hum If You Don't Know the Words is an exalting anthem of love, family and humanity.”—Shelf Awareness

“With its vivid, emotional scene-setting, alternating narration and tense plotting, this novel is a thoughtful, compelling page-turner.”—Goodhousekeeping.com

“[Marais] brings her homeland to life with compelling descriptions of both city and rural life and the great divide that separated people during the apartheid era.”—Cedar Rapids Gazette

“An important contribution to literature about racism in South Africa...it's a powerful story and one with a perspective many of us haven't read.”—Terry McMillan, New York Times bestselling author of Waiting to Exhale and I Almost Forgot About You

“Bianca Marais’s compassionate debut paints a picture of the alternately beautiful and tragic strategies we humans employ to meet our needs for love.  Hum If You Don’t Know the Wordstakes us into the human heart’s wiliness as it attempts to survive the frontal attack of racism. While the attack is a sin, the response is wondrous and wounding and an illustration of the resiliency that can transcend the color of a person’s skin.”—Rebecca Wells, author of The Crowning Glory of Calla Lily Ponder and Divine Secrets of the Ya-Ya Sisterhood

“Bianca Marais’s stunning debut offers an evocative and thought-provoking look at the unlikely relationship between two South Africans. Set against a backdrop of apartheid-era South Africa, Marais illuminates the experiences of both black and white South Africans during one of the bloodiest periods in the country’s history and gives us an emotionally powerful and historically important story about forgiveness, love and redemption.”—Tara Conklin, author of The House Girl

“Bianca Marais’s compelling debut novel is a heartrending coming-of-age tale that not only illuminates the horrors of apartheid South Africa but also speaks with unmistakable relevance to the racism of our own times.”—Jennifer Chiaverini, author of Mrs. Lincoln’s Dressmaker and Fates and Traitors

“Beautiful and tragic, intimate and sweeping, Hum If You Don’t Know the Words is a gorgeous debut novel. You don’t read this story, you live it. Bianca Marais creates characters with such love and compassion they nearly walk off the page.”—Tish Cohen, bestselling author of Town House and The Truth About Delilah Blue

“I read this book in a gallop, compelled to discover the intertwined fates of its tragic heroine, Beauty Mbali, and her young orphaned charge. Hum If You Don't Know the Words is an exciting and compassionate novel about a period of devastating cruelty in South African history. With passion and grace Marais makes the political personal and the personal intimate.”—Meira Cook, author of Nightwatching and The House on Sugarbush Road

“Bianca Marais parts the curtain on an unexpected view of Apartheid-era South Africa in this gutsy, surprising, and richly imagined tale. It will be a long time before the reader forgets the novel’s compelling characters, and the tremendous determination, yearning, and humanity with which they navigate complex emotional landscapes in their intersecting quests for connection, family, and justice.”—Ania Szado, bestselling author of Studio Saint-Ex

“Expertly crafted, both lyrical and gripping, with some truly poignant moments especially pertaining to parenthood.”—Emma Hooper, author of Etta and Otto and Russell and James

“Bianca Marais has written a haunting and moving novel of Apartheid South Africa that held me in its thrall from beginning to end. Against a backdrop of legislated racism, Marais brilliantly entwines two disparate voices in a searing story of love, loss and recovery. Masterful and memorable.”—Terry Fallis, two-time winner of the Stephen Leacock Medal for Humour

“A classic loss-of-innocence story with a striking social backdrop…Well-researched and dosed with humor and humility.”—Seattle Times