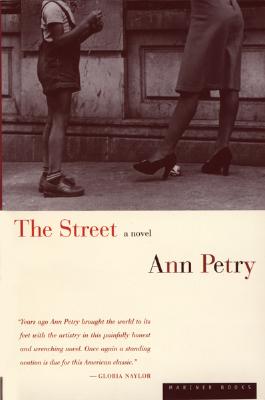 
Email for availability
"Petry is the writer we have been waiting for, hers are the stories we need to fully illuminate the questions of our moment, while also offering a page-turning good time. Ann Petry, the woman, had it all, and so does her insightful, prescient and unputdownable prose.”—Tayari Jones, The Enthusiast, New York Times Book Review

THE STREET tells the poignant, often heartbreaking story of Lutie Johnson, a young black woman, and her spirited struggle to raise her son amid the violence, poverty, and racial dissonance of Harlem in the late 1940s. Originally published in 1946 and hailed by critics as a masterwork, The Street was Ann Petry's first novel, a beloved bestseller with more than a million copies in print. Its haunting tale still resonates today.

Ann Petry was the acclaimed author of the adult novel The Street, a groundbreaking literary work about life in Harlem, which sold over a million copies. She also wrote several books for young readers, including Harriet Tubman: Conductor on the Underground Railroad, the story of the courageous and heroic woman who struggled and fought for her people before and during the Civil War.

New York Times best-selling author Tayari Jones is the author of four novels, including An American Marriage, Silver Sparrow, The Untelling, and Leaving Atlanta. Jones holds degrees from Spelman College, Arizona State University, and the University of Iowa. A winner of numerous literary awards, she is a professor of creative writing at Emory University.

“A major literary invention . . . A truly great book.” —The Los Angeles Times   “Overflows with the classic pity and terror of good imaginative writing.”   —The New York Times   “A powerful, uncompromising work of social criticism. To this day, few works of fiction have so clearly illuminated the devastating impact of racial injustice.”  —Coretta Scott King   “A classic of American realism . . . The Street rushes toward its fatalistic climax like a train toward a washed-out bridge.” —Newsday —