The Family Izquierdo: A Novel (Paperback) 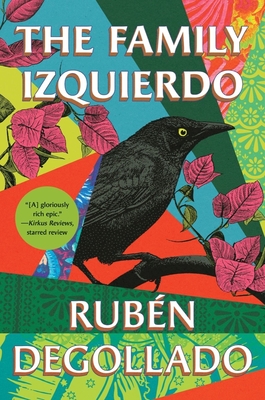 The Family Izquierdo: A Novel (Paperback)

A Kirkus Reviews Most Anticipated Book of the Fall

A masterful debut that weaves together the lives of three generations of a Mexican American family bound by love, and a curse.

The tight-knit Izquierdo family is grappling with misfortunes none of them can explain. Their beloved patriarch has suffered from an emotional collapse and is dying; eldest son Gonzalo’s marriage is falling apart; daughter Dina, beleaguered by the fear that her nightmares are real, is a shut-in. When Gonzalo digs up a strange object in the backyard of the family home, the Izquierdos take it as proof that a jealous neighbor has cursed them—could this be the reason for all their troubles? As the Izquierdos face a distressing present and an uncertain future, they are sustained by the blood that binds them, a divine presence, and an abiding love for one another. Told in a series of soulful voices brimming with warmth and humor, The Family Izquierdo is a tender narrative of a family at a turning point.

Rubén Degollado is an educator from Texas and the author of The Family Izquierdo: A Novel and the young adult novel Throw. His fiction has appeared in Beloit Fiction Journal, Gulf Coast, Hayden’s Ferry Review, and Image.
A novel of Tejano plenty blooming among the literary plains of desolation... polyphonic, mixing across borders, expanding with a musicality that only strengthens as it grows.
— Kawai Strong Washburn - New York Times Book Review

[An] epic tale… There are trials, yes, but also plenty of love and miracles in this beautiful chronicle of family.
— Austin American-Statesman

Resonant… Peppered with Spanish terms, The Family Izquierdo is a rich intertextual novel that’s embedded within Mexican festivals and traditions. It is a testament to the importance of family and the influence of religion, as well as a poignant tale about personal hopes and dreams.

An intimate, multigenerational narrative of a Mexican family, The Family Izquierdo shines in its depiction of South Texas and how the region has shaped Latinos over time.

The Family Izquierdo is filled with the rich complexities of Latinx culture… [Degollado] captures the way people in all families have different versions of the same tale. How we sit around sharing cuentos, whispering chisme, and keeping family histories alive — even if that history is sometimes embellished.

Rubén Degollado has written an open-hearted work of witness, love, and triumph. We have come far. And this brave novel reminds us of where we have to go. Anyone with a family will find themselves in these pages.
— Luis Alberto Urrea

In The Family Izquierdo, every story is a revelation. Rubén Degollado’s storytelling is as rigorous as it is intricate. Intimate and epic, it brims with magic and spirit. A bold, beautiful debut!

— Deesha Philyaw, author of The Secret Lives of Church Ladies

With a delicate and perceptive understanding of humanity and the ties which bind community to history, Rubén Degollado has painted a portrait of sincere love in The Family Izquierdo. This book feels like coming home to a warm embrace, where the characters and land leap off the page and into our hearts.

Vivid…. Degollado convincingly portrays the family’s mix of faith, superstition, and intergenerational volatility, and immerses the reader into a porous blend of English and Spanish. This is a gem.
— Publishers Weekly (starred review)

In this gloriously rich epic, we get to see a full picture of the family. Each interlocking chapter is told by a different character, unifying into a thoughtfully crafted history spanning decades. The characters, who are complex and tightly linked to one another, are enlivened by their belief in a mix of superstition, brujería, and Catholicism that feels both familiar and playful…. An instant Tejano classic.
— Kirkus Reviews (starred review)