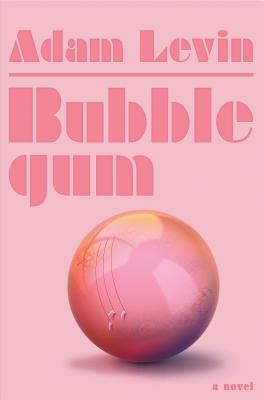 
Email for availability
"Adam Levin is one of our wildest writers and our funniest, and Bubblegum is a dazzling accomplishment of wit and inventiveness." —George Saunders

"Levin's brains may have earned him a cult...but here he swells to a democratic reach. Give him a try sometime. His gate’s wide open.” —Garth Risk Hallberg, The New York Times Book Review

The astonishing new novel by the NYPL Young Lions Fiction Award-winning author of The Instructions.

Bubblegum is set in an alternate present-day world in which the Internet does not exist, and has never existed. Rather, a wholly different species of interactive technology--a "flesh-and-bone robot" called the Curio--has dominated both the market and the cultural imagination since the late 1980s. Belt Magnet, who as a boy in greater Chicago became one of the lucky first adopters of a Curio, is now writing his memoir, and through it we follow a singular man out of sync with the harsh realities of a world he feels alien to, but must find a way to live in.
At age thirty-eight, still living at home with his widowed father, Belt insulates himself from the awful and terrifying world outside by spending most of his time with books, his beloved Curio, and the voices in his head, which he isn't entirely sure are in his head. After Belt's father goes on a fishing excursion, a simple trip to the bank escalates into an epic saga that eventually forces Belt to confront the world he fears, as well as his estranged childhood friend Jonboat, the celebrity astronaut and billionaire.
In Bubblegum, Adam Levin has crafted a profoundly hilarious, resonant, and monumental narrative about heartbreak, longing, art, and the search for belonging in an incompatible world. Bubblegum is a rare masterwork of provocative social (and self-) awareness and intimate emotional power.
ADAM LEVIN is the author of The Instructions and Hot Pink. He has been a New York Public Library Young Lions Fiction Award winner, a recipient of a National Endowment for the Arts fellowship, and a National Jewish Book Award finalist. A long-time Chicagoan, Levin currently lives in Gainesville, Florida.
Named a Most Anticipated Book of 2020 by The Boston Globe and The Chicago Tribune

“Admirably bonkers and fitfully phenomenal. . .As Levin’s previous novel, The Instructions, demonstrated even more amply (at 1,000-plus pages), you don’t come to this writer for elegance of proportion. You come for comedy, for sensibility, for style; and in this sense Bubblegum is prodigiously sustaining. . .Levin can make the kitchen-sink ambition of midcentury postmodernism feel positively new, bidding fair for the maximalist mantle of a Pynchon or a Stanley Elkin. But Levin’s consuming interest in everyday subjectivity equally pulls in the direction of minimalism; what engorges the sentences here is actually the kitchen sink of consciousness. . .When it’s humming, the pileup of plenitude and emptiness is as future-perfect as the Curio itself, the sound of the day after tomorrow… Levin’s faith in his flesh-and-bone robots yields a stunning transubstantiation.  . .[His] brains may have earned him a cult like Belt’s, but here he swells to a democratic reach. Give him a try sometime. His gate’s wide open.” —Garth Risk Hallberg, The New York Times Book Review

“Delightful. . .As funny, sad, compelling and exhilarating as anything on the internet or IRL. . .Levin unspools a story that dramatizes thinking to an extent that thought itself becomes as riveting as plot, but in which there’s also actual plot in abundance.” —The Chicago Tribune

“Fantastic. . .Deeply reimagines our world for better or worse. . .Huge and deep and dark and hilarious and trenchant and powerful and complex.” —The Austin Chronicle

“Levin is one of our wildest writers and our funniest, and Bubblegum is a dazzling accomplishment of wit and inventiveness – an irrepressible and insanely entertaining examination of our obsessive culture that doesn’t forget to be fond of that which it is satirizing. Levin’s keen and ornery mind, reveling in the world with vast energy, shows us new ways of loving it.” —George Saunders, author of the Booker Prize-winning Lincoln in the Bardo

“Perfect. . .While reveling in absurd premises and sophomoric humor, Bubblegum is, more than anything, a considered look at the human capacity for cruelty. [Levin] is known for his inventively frattish dialogue, inserts of transcripts and instruction manuals and neo-Jamesian —and at times even Joycean—sentence structure, all of which are on full display in his new venture.” —Forward

“Adam Levin’s brilliant, inventive, fully imagined alternative world gives us insight and clarity about the actual world we live in.  We are implicated, warned, but what a hilarious ride. Bubblegum is a wild, ambitious, and original novel.  Levin is a wonder.” —Dana Spiotta, author of NBCC finalist Stone Arabia and NBA finalist Eat the Document

“Monumentally imaginative. . .Levin’s vibrant voice is unlike anyone else in contemporary fiction. . .Breathtakingly bizarre, this relentlessly inventive novel teems with humanity, humor, and pathos like few other recent works and is a book many will obsess over and delight in.” —Booklist, starred review

“With Bubblegum, Adam Levin has created a cubist painting about consumerism, fetishization, and the increasingly blurred line between life and advertisement in a hyper-materialist, post-IRL society. Levin masterfully creates a world without the internet to examine the impact and insanity it has sewn into the American project, and he does so while gleefully skewering our unraveling vernacular. A freaky marvel of a tome.” —Catherine Lacey, author of Certain American States, The Answers and Nobody is Ever Missing

“Funny. . .moving. . .Levin creates a fascinating world with a wild and often touching coming-of-age story at its center.” —Publishers Weekly

“Levin is the new Mailer. Think The Naked and The Dead, remove World War II, insert the war we are in now; up the introspection, lower the Nobel posturing (Bubblegum!) and the pontificating of the self, keep the outsized ambition, make the damned book even larger. One wonders how the Mailer vacuum went empty this long. This is ambition and large-statement talent. The precision of the errancy is thrilling. This son of a bitch is perfect.” —Padgett Powell, author of You & Me

“Bubblegum is startling. Ingenious in its form and meaning-making. Levin gives you everything. A hilarious and serious meditation on what we might become. To paraphrase one of its characters, the novel makes me feel understood.” —Salvador Plascencia, author of The People of Paper

“A book may be said to be a kind of fist, and the readers of such a fist-book as Bubblegum can surely not predict or prepare for the ecstatic bewilderment of the encounter, particularly when they are greeted in the depths of it by long-form theoretical analysis of their plight.” —Jesse Ball, author of Census