Just Above My Head: A Novel (Paperback) 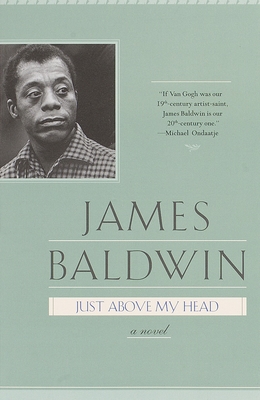 James Baldwin’s final novel is “the work of a born storyteller at the height of his powers” (The New York Times Book Review).

“Not everything is lost. Responsibility cannot be lost, it can only be abdicated. If one refuses abdication, one begins again.”

The stark grief of a brother mourning a brother opens this stunning, unforgettable novel. Here, in a monumental saga of love and rage, James Baldwin goes back to Harlem, to the church of his groundbreaking novel Go Tell It on the Mountain, to the forbidden passion of Giovanni’s Room, and to the political fire that enflames his nonfiction work. Here, too, the story of gospel singer Arthur Hall and his family becomes both a journey into another country of the soul and senses—and a living contemporary history of black struggle in this land.

James Baldwin (1924–1987) was a novelist, essayist, playwright, poet, and social critic. His first novel, Go Tell It on the Mountain, appeared in 1953 to excellent reviews, and his essay collections Notes of a Native Son and The Fire Next Time were bestsellers that made him an influential figure in the growing civil rights movement. Baldwin spent much of his life in France, where he moved to escape the racism and homophobia of the United States. He died in France in 1987, a year after being made a Commander of the French Legion of Honor.

“If Van Gogh was our nineteenth century artist-saint, James Baldwin is our twentieth century one.”—Michael Ondaatje

“The work of a born storyteller at the height of his powers . . . glimpses of family life in Harlem, rapturous music-making in the churches, moments of uneasiness in even the most casual meetings between whites and blacks—scenes that Baldwin seems preternaturally gifted in understanding.”—The New York Times Book Review

“A fine novel . . . it seems impossible for [Baldwin] to write with anything other than eloquence.  His great and peculiar power is to re-create the maddening halfway house that the black man finds himself in late-twentieth-century America.”—The New Yorker