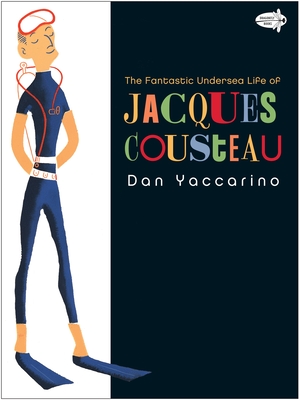 
Available from Our Distributor (Not in Store)
Jacques Cousteau was the world’s ambassador of the oceans. His popular TV series brought whales, otters, and dolphins right into people’s living rooms. Now, in this exciting picturebook biography, Dan Yaccarino introduces young readers to the man behind the snorkel.

From the first moment he got a glimpse of what lived under the ocean’s waves, Cousteau was hooked. And so he set sail aboard the Calypso to see the sea. He and his team of scientists invented diving equipment and waterproof cameras. They made films and televisions shows and wrote books so they could share what they learned. The oceans were a vast unexplored world, and Cousteau became our guide. And when he saw that pollution was taking its toll on the seas, Cousteau became our guide in how to protect the oceans as well.

DAN YACCARINO is an internationally acclaimed author-illustrator with more than 30 books to his credit. Dan is also the creator of the animated TV series Oswald and Willa's Wild Life. He lives in New York City with his wife and two children.

Review, The New York Times Book Review, May 10, 2009:
"[A] timely gift to the children– and many parents–who are too young to know the adventures of Captain Cousteau and his ship, Calypso."

Review, Chicago Tribune, May 16, 2009:
"Yaccarino's illustrations remind us of all the mysterious undersea beauty Cousteau introduced to so many."