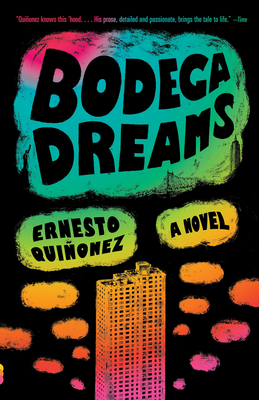 
Available from Our Distributor (Not in Store)
In this "thriller with literary merit" (Time Out New York), a stunning narrative combines the gritty rhythms of Junot Diaz with the noir genius of Walter Mosley.

Bodega Dreams pulls us into Spanish Harlem, where the word is out: Willie Bodega is king. Need college tuition for your daughter? Start-up funds for your fruit stand? Bodega can help. He gives everyone a leg up, in exchange only for loyalty—and a steady income from the drugs he pushes.

Lyrical, inspired, and darkly funny, this powerful debut novel brilliantly evokes the trial of Chino, a smart, promising young man to whom Bodega turns for a favor. Chino is drawn to Bodega's street-smart idealism, but soon finds himself over his head, navigating an underworld of switchblade tempers, turncoat morality, and murder.

"Rich with eye-opening detail, [this is] a lively and entertaining work by a young writer whose talents are deserving of a wide readership."  —Oscar Hijuelos, author of The Mambo Kings Play Songs of Love

"A new and authentic voice of the urban Latino experience." —Esmeralda Santiago, author of When I Was Puerto Rican