The Colossus: and Other Poems (Vintage International) (Paperback) 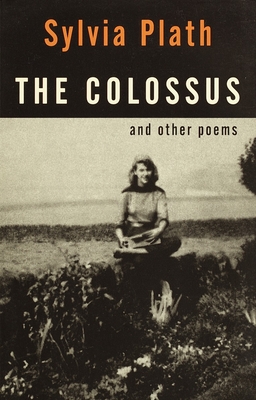 With this startling, exhilarating book of poems, which was first published in 1960, Sylvia Plath burst into literature with spectacular force. In such classics as "The Beekeeper's Daughter," "The Disquieting Muses," "I Want, I Want," and "Full Fathom Five," she writes about sows and skeletons, fathers and suicides, about the noisy imperatives of life and the chilly hunger for death. Graceful in their craftsmanship, wonderfully original in their imagery, and presenting layer after layer of meaning, the forty poems in The Colossus are early artifacts of genius that still possess the power to move, delight, and shock.

Sylvia Plath was born in 1932 in Massachusetts. She began publishing poems and stories
as a teenager and by the time she entered Smith College had won several poetry prizes.
She was a Fulbright Scholar in Cambridge, England, and married British poet Ted Hughes
in London in 1956. The young couple moved to the States, where Plath became an
instructor at Smith College, and had two children. Later, they moved back to England,
where Plath continued writing poetry and wrote The Bell Jar, which was first published
under the pseudonym Victoria Lucas in England in 1963. On February 11, 1963, Plath
committed suicide. The Bell Jar was first published under her own name in the United
States by Harper & Row in 1971, despite the protests of Plath's family. Plath's
Collected Poems, published posthumously in 1981, won the Pulitzer Prize.

"[Her poems] have that exquisite, heart-breaking quality about them that has
made Sylvia Plath our acknowledged Queen of Sorrows, the spokeswoman for our most
private, most helpless nightmares. . . . Her poetry is as deathly as it is impeccable;
it enchants us almost as powerfully as it must have enchanted her." --Joyce Carol Oates,
The New York Times

"Sylvia Plath's eye is sharp . . . and her wits responsive to what she sees." --Richard Howard,Poetry

"...The Colossus, which appeared earlier in England to unusual acclaim [was] her first volume to be published in America. Certainly the praise bestowed on her by British critics is warranted; Sylvia Plath is indeed a rare talent and a consummate craftsman...her powerful poems crackle and smolder with energy."--Guy Owen, Books Abroad

"She steers clear of feminine charm, deliciousness, gentility, supersensitivity and the act of being a poet. She simply writes good poetry."--Al Alvarez, London Observer