In Defiance of Hitler: The Secret Mission of Varian Fry (Hardcover) 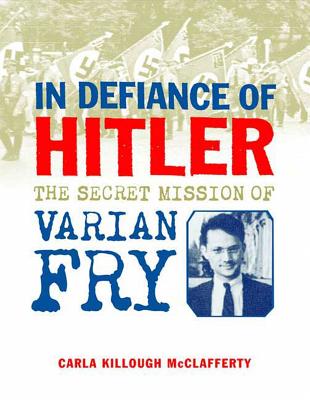 On August 4, 1940, an unassuming American journalist named Varian Fry made his way to Marseilles, France, carrying in his pockets the names of approximately two hundred artists and intellectuals – all enemies of the new Nazi regime. As a volunteer for the Emergency Rescue Committee, Fry's mission was to help these refugees flee to safety, then return home two weeks later. As more and more people came to him for assistance, however, he realized the situation was far worse than anyone in America had suspected – and his role far greater than he had imagined. He remained in France for over a year, refusing to leave until he was forcibly evicted.

At a time when most Americans ignored the atrocities in Europe, Varian Fry engaged in covert operations, putting himself in great danger, to save strangers in a foreign land. He was instrumental in the rescue of over two thousand refugees, including the novelist Heinrich Mann and the artist Marc Chagall.

Carla Killough McClafferty grew up on an agricultural farm near England, Arkansas. “My elementary school didn’t even have a library. Bookshelves underneath the windows that spanned one side of each classroom were the substitutes. To this day, libraries inspire me with awe and appreciation. I always loved to read, but it never occurred to me as a child that I would become a writer. As a matter of fact, I have no background or training to be a writer.

“After high school I graduated from Baptist Medical Center School of Radiologic Technology in Little Rock, then worked in local hospitals. After my children were born, I was a stay-at-home mom except for occasional freelance work as a radiologic technologist in orthopedic clinics.

“I began writing after the death of my fourteen-month-old son, Corey, which left me struggling to answer impossible questions like ‘Why did this have to happen?’ I wrote a book about how God brought me through this difficult period in my life titled Forgiving God (Discovery House, 1995). I found through that experience that I loved to write and have been writing ever since.”

In Something Out of Nothing: Marie Curie and Radium, Ms. McClafferty gives the scientist’s life and work a fresh telling, one that also explores the larger picture of the effects of radium in world culture, and its exploitation and sad misuse. Kirkus Reviews says the book “gives readers a terrific sense of Curie’s state of mind as she worked and loved. There are many biographies of Curie; this one stands out in its shared focus on her discovery and its legacy.”

Ms. McClafferty is a frequent speaker at church, writers’, teachers’ and school groups. She lives in North Little Rock, Arkansas, with her husband Pat. They have three children, Ryan, Brittney and the late Corey McClafferty.

“Period photographs help to flesh out the story, and an appendix provides brief follow-up biographies of some of the others involved. An interesting read that shines a light on a hitherto little-known figure.” —Kirkus Reviews

“Numerous black-and-white photographs of the period and individuals who worked closely with Fry augment the readable and well-documented text. This is an intriguing look at how life completely changed for so many and how ingenuity and daring used by a few outwitted the enemy and saved lives.” —School Library Journal

“McClafferty takes a fascinating, in-depth look at journalist Varian Fry's operation as he worked beneath the noses of the Gestapo to bring people to safety. ” —VOYA

“This book is a valuable addition to sources about the Holocaust for young people . . . should be included in the libraries of all secondary schools, and the book provides a vivid example of an individual taking great personal risks on behalf of the needs of others.” —ALAN Online Review

“End matter comprising bibliography, index, quotation sources, and an appendix discussing the later years of ERC members will be useful for student research.” —Bulletin for the Center of Children's Books