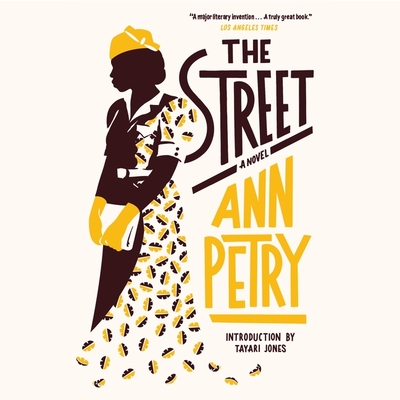 
Email or call for price.
With a new introduction from New York Times best-selling author Tayari Jones, The Street was Ann Petry's first novel, originally published in 1946 and hailed by critics as a masterwork.

The Street tells the poignant, often heartbreaking story of Lutie Johnson, a young black woman, and her spirited struggle to raise her son amid the violence, poverty, and racial dissonance of Harlem in the late 1940s.
Lutie is confronted by racism, sexism, and classism on a daily basis in her pursuit of the American dream for herself and her son, Bub. Lutie fully subscribes to the belief that if she follows the adages of Benjamin Franklin by working hard and saving wisely, she will be able to achieve the dream of being financially independent.

The first novel by an African-American woman to sell more than a million copies, its haunting tale still resonates today.

“Petry is the writer we have been waiting for; hers are the stories we need to fully illuminate the questions of our moment, while also offering a page-turning good time. Ann Petry, the woman, had it all, and so does her insightful, prescient and unputdownable prose.”??—??Tayari Jones, New York Times Book Review
Ann Petry (1908–1997), novelist, short story writer, and writer of books for young people, was one of America’s most distinguished authors. Ann began by studying pharmacology, and in 1934 received her Doctor of Pharmacy degree from the University of Connecticut College of Pharmacy. She worked as a registered pharmacist in Old Saybrook and in Lyme, and during these years wrote several short stories. When she married George David Petry in 1938, the course of her life changed. They lived in New York City, and Ann went to work for the Harlem Amsterdam News. By 1941, she was covering general news stories and editing the women’s pages of the People’s Voice in Harlem. Her first published story appeared in 1943 in the Crisis, a magazine published monthly by the NAACP. Subsequent to that, she began work on her first novel, The Street, which was published in 1946 and for which she received the Houghton Mifflin Literary Fellowship. Petry wrote two more novels, The Country Place and The Narrows, and numerous short stories, articles, and children’s books.
“A major literary invention . . . A truly great book.” —The Los Angeles Times   “Overflows with the classic pity and terror of good imaginative writing.”   —The New York Times   “A powerful, uncompromising work of social criticism. To this day, few works of fiction have so clearly illuminated the devastating impact of racial injustice.”  —Coretta Scott King   “A classic of American realism . . . The Street rushes toward its fatalistic climax like a train toward a washed-out bridge.” —Newsday