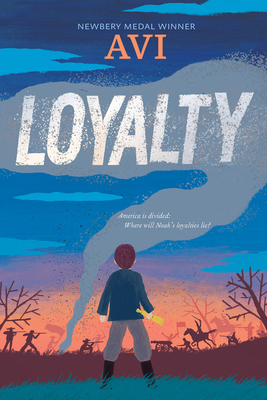 Newbery Medalist Avi explores the American Revolution from a fresh perspective in the story of a young Loyalist turned British spy navigating patriotism and personal responsibility during the lead-up to the War of Independence.

When his father is killed by rebel vigilantes, Noah flees with his family to Boston. Intent on avenging his father, Noah becomes a spy for the British and firsthand witness to the power of partisan rumor to distort facts, the hypocrisy of men who demand freedom while enslaving others, and the human connections that bind people together regardless of stated allegiances.

Awash in contradictory information and participating in key events leading to the American Revolution, Noah must forge his own understanding of right and wrong and determine for himself where his loyalty truly lies.

Avi's many acclaimed books for young readers include the Newbery Medal-winning Crispin: The Cross of Lead and the Newbery Honor books Nothing But the Truth: A Documentary Novel and The True Confessions of Charlotte Doyle as well as The Fighting Ground, Poppy, and The Secret School. He lives in Colorado.

"With his trademark eye for detail, Avi brings readers into the story's time and place, not sparing the realities of war, and dealing authentically with Noah's emotions. Inclusive and objective, the work delivers historical food for thought and a great read." — Booklist

“Avi’s narrative, told through dated entries, ebbs and flows with the tides of war, gaining intensity as the Battles of Lexington and Concord loom. The story is spiked with lively dialogue.” — Horn Book Magazine