Karolina And The Torn Curtain (A Zofia Turbotynska Mystery) (Paperback) 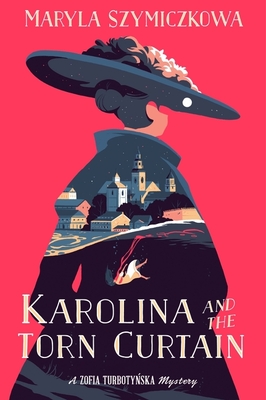 Karolina And The Torn Curtain (A Zofia Turbotynska Mystery) (Paperback)


Available from Our Distributor (Not in Store)
“An ingenious marriage of comedy and crime” (Olga Tokarczuk, Nobel laureate): when amateur sleuth and cunning socialite Zofia Turbotyńska’s beloved maid goes missing, she dives deep into Cracow’s web of crime, with only her trusted cook for company.

Cracow, 1895. Zofia and her maid Franciszka have their hands full organizing Easter festivities, especially with the household short one servant—where has the capable Karolina disappeared to?

Shortly after, Zofia hears that the body of a young woman, violated and stabbed, has washed up on a bank of the River Vistula. Domestic work can wait—Zofia must go investigate. Shockingly, the body turns out to be none other than Karolina. Working with the police, Zofia’s investigations take her deep into the city’s underbelly—a far cry from the socialite’s Cracow she’s familiar with. Desperate to unearth what happened to Karolina, though, she pushes her prejudice aside, immersing herself among prostitutes, gangsters, and duplicitous politicians to unravel a twisted tale of love and deceit.

“Written with abundant wit and flair,”* Cracow’s finest, and most iconoclastic, amateur sleuth returns in a highly politicized feminist murder mystery.
*Kirkus Reviews
MARYLA SZYMICZKOWA is a pseudonym for partners Jacek Dehnel and Piotr Tarczyński. Dehnel is the award-winning author of numerous books, including the novels Lala and Saturn and the poetry collection Aperture. Tarczyński is a translator and historian. They live in Warsaw, and the Zofia Turbotyńska Mysteries are their first shared project.

Praise for Karolina and the Torn Curtain   "Szymiczkowa... brings Cracow vividly to life and presents the period’s views on women with sly wit. This mystery will please readers looking for an unusual amateur sleuth and a picturesque setting." —Publishers Weekly  "Vividly steeped in the politics and the life and times of 1895 Cracow, this mystery, with its charming heroine and dry humor, will appeal to fans of Anne Perry’s Charlotte and Thomas Pitt series, which also weaves the social issues of the day into the story." —Booklist   "Pseudonymous partners Jacek Dehnel and Piotr Tarczyński bring both the do-gooders and the criminals of fin-de-siècle Cracow to entertaining life, but their deepest interest is in the unlikely detective lurking beneath “the sedate Mrs. Jekyll”: “the hidden Mrs. Hyde, the fearless stalker of criminals. A gravely decorous period piece that vividly evokes its moment while maintaining an archly amused distance from it." —Kirkus  Praise for Mrs. Mohr Goes Missing “[An] exceptional debut and series launch... The translation showcases the novel’s deliciously ironic voice. Fans who like colorful locales and tongue-in-cheek mysteries will eagerly await Zofia's next outing.” —Publishers Weekly, STARRED review   “A delightful debut whodunit written with abundant wit and flair. Pray for a series to follow.” —Kirkus Reviews   “Mrs. Mohr Goes Missing an amazing Polish mystery—fascinating for its vivid portrayal of 1893 Krakow, its witty style, and for Zofia, its irrepressible sleuth. The Daily Mail called it ingenious—we call this new author ‘marvelous!’”  —Charles Todd, New York Times-bestselling author of the Inspector Ian Rutledge mysteries   “An ingenious marriage of comedy and crime.” —Olga Tokarczuk, Nobel laureate and author of Man Booker International Prize winner Flights   “The unravelling of the mystery is ingenious and takes us through a social setting quivering with snobberies and dos and don’ts. It’s fun and sparky and the glimpse of turn-of-the-century Polish manners and mores is beguiling.” —Daily Mail   “Charming and moreish…Conjures up the delightful books of Dorothy L Sayers . . . The perfect diversion for annoying commutes.” —Stylist   “While there is a strong whiff of Agatha Christie in this book, it is much more than a pastiche . . . The story fuses high comedy with an evocative portrayal of the period . . . Ably translated.” —Sunday Express   “Highly comical . . . An extremely absorbing novel.” —Kurzojady     —