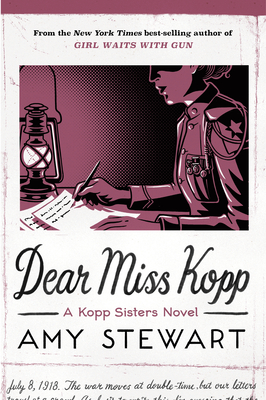 This is book number 6 in the A Kopp Sisters Novel series.

Split apart by the war effort, the indomitable Kopp sisters take on saboteurs and spies and stand up to the Army brass as they face the possibility that their life back home will never be the same.

The U.S. has finally entered World War I. Constance, the oldest of the Kopp sisters, is doing intelligence work on the home front for the Bureau of Investigation while youngest sister and aspiring actress, Fleurette, travels across the country entertaining troops with song and dance. Meanwhile, at an undisclosed location in France, Norma oversees her thwarted pigeon project for the Army Signal Corps. When her roommate, a nurse at the American field hospital, is accused of stealing essential medical supplies, the intrepid Norma is on the case to find the true culprit.

Determined to maintain their sometimes-scratchy family bonds across the miles, the far-flung sisters try to keep each other in their lives. But the world has irrevocably changed—when will the sisters be together again?

Told through letters, Dear Miss Kopp weaves the stories of real-life women a century ago, proving once again that “any novel that features the Kopp sisters is going to be a riotous, unforgettable adventure” (Bustle).

AMY STEWART is the New York Times best-selling author of the acclaimed Kopp Sisters series, which began with Girl Waits with Gun. Her seven nonfiction books include The Drunken Botanist and Wicked Plants. She lives in Portland, Oregon.

"Stewart’s engrossing sixth Kopp Sisters novel finds the three siblings, based on actual sisters, separated for the first time, though they keep in touch through letters written from May to December 1918...Readers will eagerly await the sisters’ postwar adventures."—Publishers Weekly

"Amy Stewart may have gotten her start as a science and nature writer, but she’s just as lively and entertaining when she’s crafting historical mysteries. In the latest book to feature the fabulous real life Kopp sisters, the eldest of whom was the first female Under Sheriff in the United States, World War I is in full swing and the sisters immediately get roped into quite a few wartime intrigues."—Crimereads

"This is an excellent addition to this well written and researched historical series and is highly recommended. Although the novel reads well on its own, reading the earlier episodes is recommended to really get to know these delightful characters."— Mystery & Suspense Magazine

“An unforgettable, not-to-be-messed-with heroine . . . The rest is kickass history.”—Marie Claire

“Excels in revisiting a vanished time, place and sensibility.”—Washington Post

“Amy Stewart uses her skills as a researcher to lovingly excavate the wonderful, entirely forgotten story of the Kopp sisters.”—USA Today

“Zippy, winsome . . . [A] cinematic story of the [Kopps], the siege instigated by their powerful enemy, and their brave efforts in the face of real violence.”—Los Angeles Times

“Stewart gives us three sisters whose bond—scratchy and well-worn but stronger for it—is unspoken but effortless.”—NPR

“A smart, romping adventure, featuring some of the most memorable and powerful female characters I’ve seen in print for a long time. I loved every page as I followed the Kopp sisters through a too-good-to-be-true (but mostly true!) tale of violence, courage, stubbornness, and resourcefulness.”—Elizabeth Gilbert