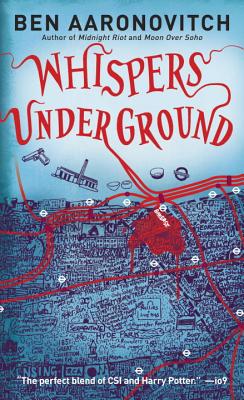 This is book number 3 in the Rivers of London series.

A WHOLE NEW REASON TO MIND THE GAP

It begins with a dead body at the far end of Baker Street tube station, all that remains of American exchange student James Gallagher—and the victim’s wealthy, politically powerful family is understandably eager to get to the bottom of the gruesome murder. The trouble is, the bottom—if it exists at all—is deeper and more unnatural than anyone suspects . . . except, that is, for London constable and sorcerer’s apprentice Peter Grant. With Inspector Nightingale, the last registered wizard in England, tied up in the hunt for the rogue magician known as “the Faceless Man,” it’s up to Peter to plumb the haunted depths of the oldest, largest, and—as of now—deadliest subway system in the world.

At least he won’t be alone. No, the FBI has sent over a crack agent to help. She’s young, ambitious, beautiful . . . and a born-again Christian apt to view any magic as the work of the devil. Oh yeah—that’s going to go well.
Ben Aaronovitch was born in London in 1964 and had the kind of dull routine childhood that drives a man to drink or to science fiction. He is a screenwriter, with early notable success on BBC television’s legendary Doctor Who, for which he wrote some episodes now widely regarded as classics, and which even he is quite fond of. He has also penned several groundbreaking TV tie-in novels. After a decade of such work, he decided it was time to show the world what he could really do and embarked on his first serious original novel. The result is Midnight Riot, the debut adventure of Peter Grant, followed by Moon Over Soho.
“The perfect blend of CSI and Harry Potter.”—io9

“Fresh, original, and a wonderful read. I loved it.”—Charlaine Harris

“A great start to what will hopefully be a long series of adventures.”—SFRevu