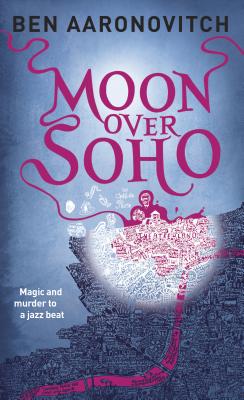 This is book number 2 in the Rivers of London series.

The song. That’s what London constable and sorcerer’s apprentice Peter Grant first notices when he examines the corpse of Cyrus Wilkins, part-time jazz drummer and full-time accountant, who dropped dead of a heart attack while playing a gig at Soho’s 606 Club. The notes of the old jazz standard are rising from the body—a sure sign that something about the man’s death was not at all natural but instead supernatural.

Body and soul—they’re also what Peter will risk as he investigates a pattern of similar deaths in and around Soho. With the help of his superior officer, Detective Chief Inspector Thomas Nightingale, the last registered wizard in England, and the assistance of beautiful jazz aficionado Simone Fitzwilliam, Peter will uncover a deadly magical menace—one that leads right to his own doorstep and to the squandered promise of a young jazz musician: a talented trumpet player named Richard “Lord” Grant—otherwise known as Peter’s dear old dad.
Ben Aaronovitch was born in London in 1964 and had the kind of dull routine childhood that drives a man to drink or to science fiction. He is a screenwriter, with early notable success on BBC television’s legendary Doctor Who, for which he wrote some episodes now widely regarded as classics, and which even he is quite fond of. He has also penned several groundbreaking TV tie-in novels. After a decade of such work, he decided it was time to show the world what he could really do and embarked on his first serious original novel. The result is Midnight Riot, the debut adventure of Peter Grant, followed by Moon Over Soho.
“A terrific follow-up to [Aaronovitch’s] novel Midnight Riot, the debut of Peter Grant and his own weird London. Grant continues to learn the ropes of magical London, a process that takes him on a trip through Nightingale's haunted past and into some of the most interesting places you won't find on any official tour. Aaronovitch makes the story sing, building momentum until the ending is literally breathless.”  --SF Revu

“A realistic modern-day police procedural populated by increasingly solid characters and written in the same consistently witty style as the first Peter Grant novel [Midnight Riot]. . . . One of the most entertaining books I’ve read in a long time.”  --Fantasy Literature