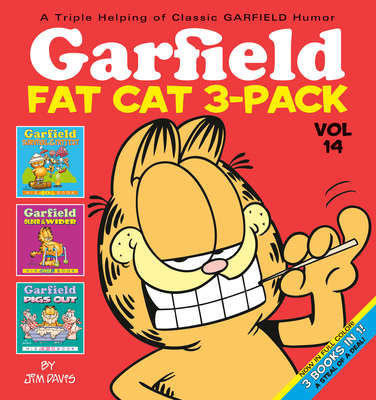 This is book number 14 in the Garfield series.

This fun-filled collection includes three books in one: Garfield Survival of the Fattest, Garfield Older & Wider, and Garfield Pigs Out.

Fat-cat fans, rejoice! The portly puss with a penchant for pasta is back—and better than ever.

Garfield may be born to snooze (he needs his daily eighteen hours of shut-eye), but when he finally wakes up, he's ready for action . . . hacking up a monster hair ball, unleashing a killer burp, or giving Jon a tongue-lashing (with Odie's tongue). It's all in a day's play for the famous feline!