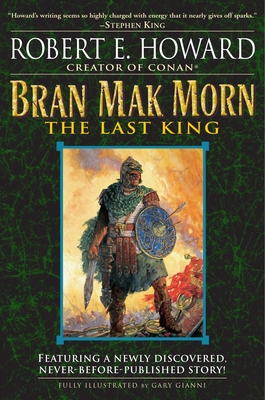 
Available from Our Distributor (Not in Store)
From Robert E. Howard’s fertile imagination sprang some of fiction’s greatest heroes, including Conan the Cimmerian, King Kull, and Solomon Kane. But of all Howard’s characters, none embodied his creator’s brooding temperament more than Bran Mak Morn, the last king of a doomed race.

In ages past, the Picts ruled all of Europe. But the descendants of those proud conquerors have sunk into barbarism . . . all save one, Bran Mak Morn, whose bloodline remains unbroken. Threatened by the Celts and the Romans, the Pictish tribes rally under his banner to fight for their very survival, while Bran fights to restore the glory of his race.

Lavishly illustrated by award-winning artist Gary Gianni, this collection gathers together all of Howard’s published stories and poems featuring Bran Mak Morn–including the eerie masterpiece “Worms of the Earth” and “Kings of the Night,” in which sorcery summons Kull the conqueror from out of the depths of time to stand with Bran against the Roman invaders.

Also included are previously unpublished stories and fragments, reproductions of manuscripts bearing Howard’s handwritten revisions, and much, much more.

Special Bonus: a newly discovered adventure by Howard, presented here for the very first time.
Robert E. Howard is one of the most prolific short story writers in American history, and has created such beloved characters as Conan the Barbarian, Kull of Atlantis, Soloman Kane, Bran Mak Morn, El Borak, and Dark Agnès de Chastillon. He tragically passed away in 1936.
“Howard’s writing seems so highly charged with energy that it nearly gives off sparks.”
–STEPHEN KING

“Howard was a true storyteller–one of the first, and certainly among the best, you’ll find in heroic fantasy. If you’ve never read him before, you’re in for a real treat.”
–CHARLES DE LINT, award-winning author of Forests of the Heart