The Ranger of Marzanna (The Goddess War #1) (Paperback) 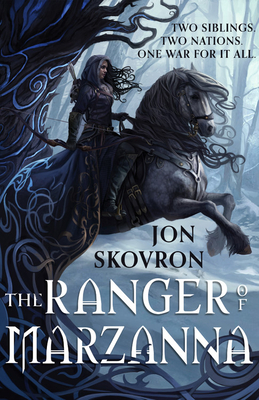 This is book number 1 in the The Goddess War series.

When their father is murdered by imperial soldiers, two siblings set out on opposite paths--one will destroy the Empire forever and the other will save it--in this thrilling new epic fantasy.
Sonya is training to be a Ranger of Marzanna, an ancient sect of warriors who have protected the land for generations. But the old ways are dying, and the rangers have all been forced into hiding or killed off by the invading Empire.
When her father is murdered by imperial soldiers, she decides to finally take action. Using her skills as a ranger she will travel across the bitter cold tundra and gain the allegiance of the only other force strong enough to take down the invaders.
But nothing about her quest will be easy. Because not everyone is on her side. Her brother, Sebastian, is the most powerful sorcerer the world has ever seen. And he's fighting for the empire.

Jon Skovron is the author of The Empire of Storms Trilogy and several young adult novels. His short stories have appeared in publications such as ChiZine and Baen's Universe. He lives just outside Washington, D.C. with his two sons and two cats.

"Skovron launches his Slavic-influenced Goddess War series with this intricate, well-told fantasy.... This is epic fantasy done right."—Publishers Weekly (starred review) on The Ranger of Marzanna

"The worldbuilding is solid, the action is nonstop, and Skovron's overall character development is exceptional (especially when it comes to the female main characters, who are all brilliantly multidimensional and identifiable) ... An undeniable page-turner that will have readers salivating for the next volume of this projected trilogy."—Kirkus on The Ranger of Marzanna

"The Ranger of Marzanna pits brother against sister in a bewitching, snow-swept world, where political schemes collide with the machinations of a death goddess. A magical tale of power and sacrifice, manipulation and betrayal."—Melissa Caruso, author of The Tethered Mage