The Undertaking of Hart and Mercy (Paperback) 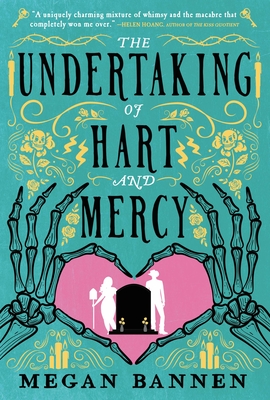 The Undertaking of Hart and Mercy (Paperback)

"A uniquely charming mixture of whimsy and the macabre that completely won me over. If you ever wished for an adult romance that felt like Howl's Moving Castle, THIS IS THAT BOOK." —Helen Hoang, author of The Kiss Quotient

Hart is a marshal, tasked with patrolling the strange and magical wilds of Tanria. It’s an unforgiving job, and Hart’s got nothing but time to ponder his loneliness.

Mercy never has a moment to herself. She’s been single-handedly keeping Birdsall & Son Undertakers afloat in defiance of sullen jerks like Hart, who seems to have a gift for showing up right when her patience is thinnest.

After yet another exasperating run-in with Mercy, Hart finds himself penning a letter addressed simply to “A Friend”. Much to his surprise, an anonymous letter comes back in return, and a tentative friendship is born.

If only Hart knew he’s been baring his soul to the person who infuriates him most—Mercy. As the dangers from Tanria grow closer, so do the unlikely correspondents. But can their blossoming romance survive the fated discovery that their pen pals are their worst nightmares—each other?

Set in a world full of magic and demigods, donuts and small-town drama, this enchantingly quirky, utterly unique fantasy is perfect for readers of The House in the Cerulean Sea and The Invisible Library.

"I showed up for the fantastic, fun fantasy setting but it was Hart and Mercy that kept me reading." —Ruby Dixon

Megan Bannen is a former public librarian whose YA debut The Bird and the Blade was an Indies Introduce pick for 2018, a Kids Indie Next Fall 2018 List pick, a Kirkus Best YA of 2018, and recently was named by Stephenie Meyer as the most recent book that made her cry. In her spare time, she collects graduate degrees from Kansas colleges and universities. While most of her professional career has been spent in public libraries, she has also sold luggage, written grants, and taught English at home and abroad. She lives in the Kansas City area with her husband and their two sons.

"Ever since first finishing The House In The Cerulean Sea by TJ Klune, I’ve searched for a love story that made me feel both hopeful and cozy with characters so well-established that they felt like old friends. In 2022, the book closest to that was The Undertaking of Hart and Mercy by Megan Bannen"—In Between Drafts: Best of the Year