The War Outside (Hardcover) 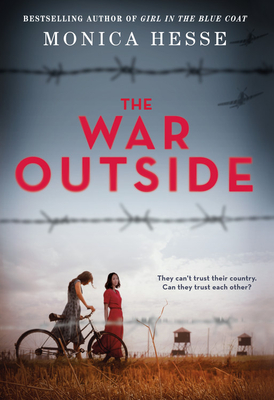 The War Outside (Hardcover)

“These teens couldn’t be more different: Haruko, Japanese American, outgoing, popular, compliant; and Margot, German American, reclusive, mistrustful, analytical. But what they have in common is more important: they’re very bright, observant members of families in turmoil, and in 1944 they’re living in an internment camp for enemy aliens. A secret and unlikely friendship becomes a lifeline for both of them. Like Hesse’s Girl in the Blue Coat, this riveting novel takes readers where we’ve never imagined going, with twists, turns, and startling intensity. The book is mesmerizing, empathetic, and incredibly timely in its treatment of injustice and fear of the other.”
— Banna Rubinow, The River's End Bookstore, Oswego, NY

It's 1944, and World War II is raging across Europe and the Pacific. The war seemed far away from Margot in Iowa and Haruko in Colorado--until they were uprooted to dusty Texas, all because of the places their parents once called home: Germany and Japan.

Haruko and Margot meet at the high school in Crystal City, a "family internment camp" for those accused of colluding with the enemy. The teens discover that they are polar opposites in so many ways, except for one that seems to override all the others: the camp is changing them, day by day and piece by piece. Haruko finds herself consumed by fear for her soldier brother and distrust of her father, who she knows is keeping something from her. And Margot is doing everything she can to keep her family whole as her mother's health deteriorates and her rational, patriotic father becomes a man who distrusts America and fraternizes with Nazis.

With everything around them falling apart, Margot and Haruko find solace in their growing, secret friendship. But in a prison the government has deemed full of spies, can they trust anyone--even each other?
Monica Hesse is the bestselling author of Girl in the Blue Coat and American Fire, as well as a journalist with The Washington Post. She lives outside Washington, D.C. with her husband and their dog.
Praise for The War Outside:A Publishers Weekly Best Book of 2018A 2019 YALSA Best Fiction for Young Adults PickA 2018 BCCB Bulletin Blue Ribbon TitleA 2019 Notable Social Studies Trade Book for Young People
"Once again, Monica Hesse delivers an incredibly compelling and beautifully researched novel. The War Outside vividly brings readers into an underrepresented and dark period of American history. A must-read for fans of historical fiction."—Ruta Sepetys, #1 New York Times bestselling author

"Monica Hesse takes a setting we think we understand and shifts it in an important way...a tightly plotted exploration of the consequences of fear."—The New York Times Book Review

* "...an extraordinary novel of injustice and xenophobia based on real history."—Booklist, starred review

* "Teens and adults interested in WWII books, especially situations that haven't been written about extensively,will want to experience this story."—SLC, starred review

"Monica Hesse's The War Outside pierces the heart with its exceptional story of family, friends and country...Riveting and meticulously researched, this story reverberates with authentic voices as it explores adolescent growth under dreadful circumstances."—BookPage

"Hesse's books are like time machines-vehicles that help us explore our past."—Mashable

"I did not expect this book to knock me off my feet with its lyrical brilliance, vivid storyline, and heart wrenching ending. Let's just say, if all historical fiction was like this book, it'd be my most-read genre."
—Book Riot


"Girl in the Blue Coat is a powerful, compelling coming-of-age story set against the dark and dangerous backdrop of World War II. It's an important and page-turning look at the choices all of us--including young adults--have to make in wartime. A beautiful combination of heartbreak, loss, young love, and hope."—Kristin Hannah, #1 New York Times bestselling author of The Nightingale

"A tapestry of guilt and acceptance, growing responsibility, and reluctant heroism, Hanneke's coming-of-age under heartbreaking circumstances is a jarring reminder of how war consumes and transforms the passions of ordinary life. Every devastating moment of this beautiful novel is both poignant and powerful, and every word feels true."—Elizabeth Wein, New York Times bestselling author of Black Dove, White Raven; Rose Under Fire; and the Printz Honor-winning Code Name Verity

"In an occupied city, a young woman's daring transforms into true courage when she confronts a mystifying disappearance. From page one, I couldn't turn the pages fast enough. Enthralling."—Judy Blundell, New York Times bestselling author of Strings Attached and the National Book Award-winning What I Saw and How I Lied

"It's no small feat to bring the past to life, especially a history as dark and desperate as World War II. Monica Hesse does just this with Hanneke's story. Brace yourself, dear reader, to have your heart bruised--and possibly even broken--in the most meaningful of ways."—Ryan Graudin, author of The Walled City and Wolf by Wolf

"Taut and intelligent... the historical setting is rendered the way only an expert can do it."—The Washington Post

"The themes of love, betrayal, heroism, social responsibility, and atonement are beautifully intertwined with well-developed characters and a compelling story line. Thoroughly researched, this work brings history alive in a clear and concise way that rings true. A must-read for fans of historical fiction, especially stories set during World War II."—School Library Journal

"Rich in content and emotion, this is a first-rate companion to the historical tales of the onderduikers, the hidden Jews of Holland, and a compelling read."—Kirkus Reviews

"This heartbreaking story of terror and loss sweeps you into a time-is-running-out mystery that delivers plot twists and a shocking final punch that'll haunt you for days."—Justine Magazine