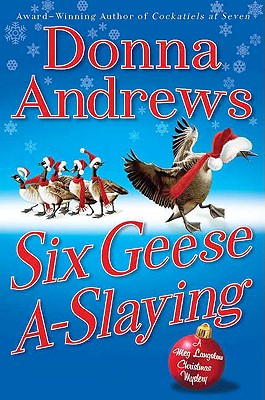 Meg and Michael's house is serving as the marshaling point for the annual Caerphilly Christmas parade. The theme is "The Twelve Days of Christmas," and it features twelve drummers from the school marching band, eleven bagpipers, ten leaping lords costumed in medieval finery from the college drama department, etc. There are also assorted Christmas-themed floats, a live nativity scene on a flatbed truck, the Three Wise Men on Caerphilly zoo camels, and Santa Claus in a bright red horse-drawn sleigh (eight reindeer were beyond the zoo's scope).

Meg has been volunteered to organize the parade, which is to proceed from her house to the local campus, where Santa will take up residence to hear the Christmas wishes of the town's children. Of course, getting all the camels, pipers, leapers, and drummers in order is proving every bit as difficult as Meg feared it would be. Then her nephew Eric, wide-eyed and ashen-faced, whispers, "Meg, something's wrong with Santa."

The local curmudgeon, whose beard and belly made him a natural for the role, has been murdered. Now Meg and Chief Burke, who is playing one of the wise men, are faced with the two-fold mission of solving the murder and saving Christmas

Donna Andrews has won the Agatha, Anthony, and Barry awards, a "Romantic Times" award for best first novel, and a Lefty for funniest mystery. She spends her free time gardening at her home in Reston, Virginia.

“At least one chuckle -- and sometimes a guffaw --per page. Joy to the world, indeed.”--Richmond Times-Dispatch


“This novel is a laugh-aloud, fast-reading romp sure to de-stress your holidays.”--Omaha World-Herald