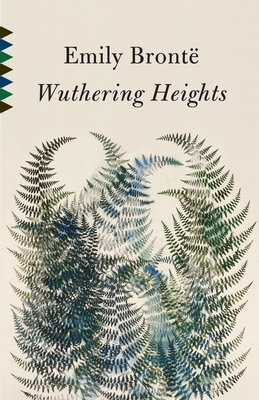 
Available from Our Distributor (Not in Store)
Perhaps the most haunting and tormented love story ever written, Wuthering Heights is the tale of the troubled orphan Heathcliff and his doomed love for Catherine Earnshaw.

Published in 1847, the year before Emily Bronte's death at the age of thirty, Wuthering Heights has proved to be one of the nineteenth century's most popular yet disturbing masterpieces. The windswept moors are the unforgettable setting of this tale of the love between the foundling Heathcliff and his wealthy benefactor's daughter, Catherine. Through Catherine's betrayal of Heathcliff and his bitter vengeance, their mythic passion haunts the next generation even after their deaths. Incorporating elements of many genres—from gothic novels and ghost stories to poetic allegory—and transcending them all, Wuthering Heights is a mystifying and powerful tour de force.
Emily Jane Brontë was the most solitary member of a unique, tightly-knit, English provincial family. Born in 1818, she shared the parsonage of the town of Haworth, Yorkshire, with her older sister, Charlotte, her brother, Branwell, her younger sister, Anne, and her father, The Reverend Patrick Brontë. All five were poets and writers; all but Branwell would publish at least one book.

Fantasy was the Brontë children’s one relief from the rigors of religion and the bleakness of life in an impoverished region. They invented a series of imaginary kingdoms and constructed a whole library of journals, stories, poems, and plays around their inhabitants. Emily’s special province was a kingdom she called Gondal, whose romantic heroes and exiles owed much to the poems of Byron.

Brief stays at several boarding schools were the sum of her experiences outside Haworth until 1842, when she entered a school in Brussels with her sister Charlotte. After a year of study and teaching there, they felt qualified to announce the opening of a school in their own home, but could not attract a single pupil.

In 1845 Charlotte Brontë came across a manuscript volume of her sister’s poems. She knew at once, she later wrote, that they were “not at all like poetry women generally write…they had a peculiar music–wild, melancholy, and elevating.” At her sister’s urging, Emily’s poems, along with Anne’s and Charlotte’s, were published pseudonymously in 1846. An almost complete silence greeted this volume, but the three sisters, buoyed by the fact of publication, immediately began to write novels. Emily’s effort was Wuthering Heights; appearing in 1847 it was treated at first as a lesser work by Charlotte, whose Jane Eyre had already been published to great acclaim. Emily Brontë’s name did not emerge from behind her pseudonym of Ellis Bell until the second edition of her novel appeared in 1850.

In the meantime, tragedy had struck the Brontë family. In September of 1848 Branwell had succumbed to a life of dissipation. By December, after a brief illness, Emily too was dead; her sister Anne would die the next year. Wuthering Heights, Emily’s only novel, was just beginning to be understood as the wild and singular work of genius that it is. “Stronger than a man,” wrote Charlotte, “Simpler than a child, her nature stood alone.”
"It is as if Emily Brontë could tear up all that we know human beings by, and fill these unrecognizable transparencies with such a gust of life that they transcend reality."
—Virginia Woolf