The Castaway's War: One Man's Battle against Imperial Japan (Hardcover) 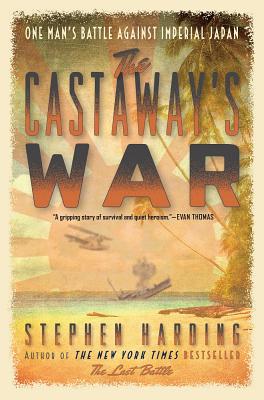 By Stephen Harding
$26.99
Email or call for price.

Shipwrecked on a South Pacific island, a young US Navy lieutenant waged a one-man war against the Japanese

In the early hours of July 5, 1943, the destroyer USS Strong was hit by a Japanese torpedo. The powerful weapon broke the destroyer's back, killed dozens of sailors, and sparked raging fires. While accompanying ships were able to take off most of Strong's surviving crewmembers, scores went into the ocean as the once-proud warship sank beneath the waves--and a young officer's harrowing story of survival began.

Lieutenant Hugh Barr Miller, a pre-war football star at the University of Alabama, went into the water as the vessel sank. Severely injured, Miller and several others survived three days at sea and eventually landed on a Japanese-occupied island. The survivors found fresh water and a few coconuts, but Miller, suffering from internal injuries and believing he was on the verge of death, ordered the others to go on without him. They reluctantly did do, believing, as Miller did, that he would be dead within hours.

But Miller didn't die, and his health improved enough for him to begin searching for food. He also found the enemy--Japanese forces patrolling the island. Miller was determined to survive, and so launched a one-man war against the island's occupiers.

Based on official American and Japanese histories, personal memoirs, and the author's exclusive interviews with many of the story's key participants, The Castaway's War is a rousing story of naval combat, bravery, and determination.

“In The Castaway's War, noted author Stephen Harding brings to life an epic tale of one man triumphing over the elements, fear, privation, and the Japanese. In stirring prose, Harding relates the saga of naval Lieutenant Hugh Barr Miller, a World War II Robinson Crusoe whose amazing exploits while stranded on a Japanese-controlled island seem ripped from fiction. His tale, ably brought to life through Harding's skillful prose, shines as an example of what one person can achieve.”—John Wukovits, author of Hell from the Heavens and For Crew and Country

Kirkus Reviews, 3/1/16
“A suspenseful recounting of the torpedoing of the USS Strong in the South Pacific in July 1943 and one soldier's subsequent eluding of capture on the Japanese-held Solomon Islands. An author who knows how to tell an exciting war story…Harding builds the suspense with intricate detail—and refreshingly, without, phony dialogue…An amazing journey through adversity and desperation.”

“Stephen Harding has done it again! He has somehow found a truly extraordinary story from World War II that has all the elements of a Hollywood thriller or adventure movie, and yet is true in every regard. We're all familiar with the stories of sole Japanese who stayed in obscure island jungles fighting on after the peace, but here is its exact mirror image: an American who fought on during wartime on an island from which he had no hope of escape. Unbroken meets The Sands of Iwo Jima.”—Andrew Roberts, author of Napoleon and The Storm of War

“Stephen Harding pulls back the jungle canopy on Arundel Island to uncover a riveting story of courage and resilience from World War II. The Castaway's War weaves together meticulous research and gripping storytelling to bring alive a story that transcends the war. At its heart, this is a book about finding the inner strength to battle on.”—Brian Murphy, author of 81 Days below Zero

Advance praise for The Castaway's War

“Stephen Harding is the best kind of war historian: clear, fact-based, precise, careful to avoid hype and tall tales—but also sensitive to the intensely human drama of men struggling to maintain their existence and sanity—and even dignity—under the most dire and extreme circumstances. In Lieutenant Hugh Barr Miller, Harding has found a character for the ages and told a gripping story of survival and quiet heroism.”—Evan Thomas, author of John Paul Jones and Sea of Thunder

“Stephen Harding is an extraordinary historian, has somehow found a virtually unknown story about World War II, then told that story with such detail and precision that it comes alive—and is impossible to put down. The Castaway's War reads like a thriller, proving again that true history has a punch that few novelists ever achieve.”—Alan Furst, bestselling author of Dark Star and Night Soldiers

InfoDad blog, 6/2/16
“The Castaway's War is a sort of Robinson Crusoe tale with espionage and bullets.”

Collected Miscellany, 6/20/16
“Harding brings the story to life with his excellent prose.”

Masculine Books, 6/29/16
“[An] informative book…Harding does history a service by doing a tremendous amount of research to unveil this tale for today's readers…He is clearly a scholar who digs deep when learning about a subject…Gripping…Provides vivid accounts of battle…It really captures what it was like to stare death in the face day after day…If you're a fan of military history, then you must add this book to your collection.”

Washington Independent Review of Books, 8/9/16
“A heart-pounding history of tragedy at sea…From the first chapter, Harding's extensive knowledge of ships and navy life materializes in detailed descriptions sure to trigger memories for veterans or engage an eager hobbyist…A pulse-pounding tribute to a highly decorated veteran whose story has finally been told for a wider audience.”

San Antonio Express-News, 3/13/16
“A fascinating account of a sailor's determination to survive in the face of wartime adversity…A captivating look into one man's will to not only live, but to also deliver critical information regarding enemy movement in the area…The book grabs the reader in a stronghold…Harding, a journalist specializing in military affairs, has transformed himself into a master storyteller who has given World War II readers a book they will find difficult to put down until the final page.”

New York Journal of Books, 5/2/16
“Although this is an essentially obscure World War II event, it needs telling, if for no other reason than to demonstrate to the generations that have followed that of the ‘greatest' the sacrifices were made by those who survived as well as those who paid the ultimate price…All of their stories need to be told, and this is one that needs to be read.”

Portland Book Review, 5/17/16
“The story is well told with a structure that allows easy understanding of the events leading to the episode as well as what followed. It allows one to appreciate what Lt. Miller experienced and how he sustained himself.”