Essays on Liberalism and the Economy, Volume 18 (The Collected Works of F. A. Hayek #18) (Hardcover) 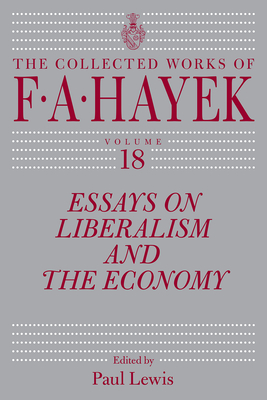 Essays on Liberalism and the Economy, Volume 18 (The Collected Works of F. A. Hayek #18) (Hardcover)

This is book number 18 in the The Collected Works of F. A. Hayek series.

A deft selection of unpublished and little-known works by F. A. Hayek that will serve to enlighten and enliven debates around the ever-changing face of Western liberalism

Across seventeen volumes to date, the University of Chicago Press’s Collected Works of F. A. Hayek series has anthologized the diverse and prolific writings of the Austrian economist synonymous with classical liberalism. Essays on Liberalism and the Economy traces the author’s long and evolving writings on the cluster of beliefs he championed most: liberalism, its core tenets, and how its tradition represents the best hope for Western civilization.

This volume contains material from almost the entire span of Hayek’s career, the earliest from 1931 and the last from 1984. The works were written for a variety of purposes and audiences, and they include—along with conventional academic papers—encyclopedia entries, after-dinner addresses, a lecture for graduate students, a book review, newspaper articles, and letters to the editors of national newspapers. While many are available elsewhere, two have never appeared in print, and two others have not been published in English.

The varied formats collected here are enriched by Hayek’s changing voice at different stages of his life. Some of the pieces resonate as high-minded and noble; some are meant as cuts to “intellectuals” (a pejorative term when used by Hayek) like Keynes and Galbraith. All serve to distill important threads of his worldview.

Paul Lewis is professor of political economy at King’s College London and an affiliated fellow with the F. A. Hayek Program for Advanced Study in Philosophy, Politics, and Economics at the Mercatus Center at George Mason University.
"This collection of Hayek's essays includes some of his most important. I'm eager for the world to have this convenient access to these works. Lewis is a learned guide with just the right touch, and his introduction is masterful. This work is both splendid and important."
— Donald J. Boudreaux, George Mason University