Studies on the Abuse and Decline of Reason: Text and Documents (The Collected Works of F. A. Hayek #13) (Hardcover) 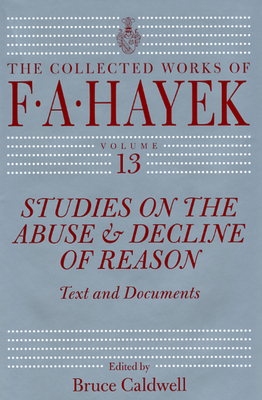 Studies on the Abuse and Decline of Reason: Text and Documents (The Collected Works of F. A. Hayek #13) (Hardcover)

This is book number 13 in the The Collected Works of F. A. Hayek series.

Studies on the Abuse and Decline of Reason is a series of fascinating essays on the study of social phenomena. How to best and most accurately study social interactions has long been debated intensely, and there are two main approaches: the positivists, who ignore intent and belief and draw on methods based in the sciences; and the nonpositivists, who argue that opinions and ideas drive action and are central to understanding social behavior. F. A. Hayek’s opposition to the positivists and their claims to scientific rigor and certainty in the study of human behavior is a running theme of this important book.

Hayek argues that the vast number of elements whose interactions create social structures and institutions make it unlikely that social science can predict precise outcomes. Instead, he contends, we should strive to simply understand the principles by which phenomena are produced. For Hayek this modesty of aspirations went hand in hand with his concern over widespread enthusiasm for economic planning. As a result, these essays are relevant to ongoing debates within the social sciences and to discussion about the role government can and should play in the economy.
Bruce Caldwell is research professor of economics and the director of the Center for the History of Political Economy at Duke University. He is the general editor of the Collected Works of F. A. Hayek series, also published by the University of Chicago Press.