Capital and Interest (The Collected Works of F. A. Hayek #11) (Hardcover) 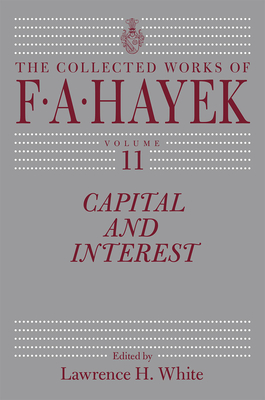 Capital and Interest (The Collected Works of F. A. Hayek #11) (Hardcover)

This is book number 11 in the The Collected Works of F. A. Hayek series.

Produced throughout the first fifteen years of Hayek’s career, the writings collected in Capital and Interest see Hayek elaborate upon and extend his landmark lectures that were published as Prices and Production and work toward the technically sophisticated line of thought seen in his later Pure Theory of Capital. Illuminating the development of Hayek’s detailed contributions to capital and interest theory, the collection also sheds light on how Hayek’s work related to other influential economists of the time. Highlights include the 1936 article “The Mythology of Capital”—presented here alongside Frank Knight’s criticisms of the Austrian theory of capital that prompted it—and “The Maintenance of Capital,” with subsequent comments by the English economist A. C. Pigou. These and other familiar works are accompanied by lesser-known articles and lectures, including a lecture on technological progress and excess capacity. An introduction by the book’s editor, leading Hayek scholar Lawrence H. White, places Hayek’s contributions in careful historical context, with ample footnotes and citations for further reading, making this a touchstone addition to the University of Chicago Press’s Collected Works of F. A. Hayek series.

Lawrence H. White is professor of economics at George Mason University.
“Capital and Interest is lucid, logically organized, and speaks clearly to the big issues behind each collection of articles. White has done an exemplary job, chronicling the development of Hayek’s thought.”
— Avi J. Cohen, York University and University of Toronto

“An excellent collection. White has expertly organized Hayek’s articles on capital theory, supplementing these essays with an accessible introduction that provides a modern appreciation for both the depth of Hayek’s thinking and the changes in his views over time.”
— Ross B. Emmett, Michigan State University