The Pure Theory of Capital (The Collected Works of F. A. Hayek #12) (Paperback) 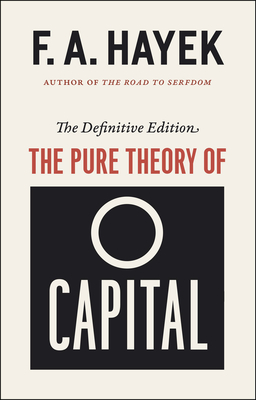 The Pure Theory of Capital (The Collected Works of F. A. Hayek #12) (Paperback)

This is book number 12 in the The Collected Works of F. A. Hayek series.

The Pure Theory of Capital, F. A. Hayek’s long-overlooked, little-understood volume, was his most detailed work in economic theory. Originally published in 1941 when fashionable economic thought had shifted to John Maynard Keynes, Hayek’s manifesto of capital theory is now available again for today’s students and economists to discover.

With a new introduction by Hayek expert Lawrence H. White, who firmly situates the book not only in historical and theoretical context but within Hayek’s own life and his struggle to complete the manuscript, this edition commemorates the celebrated scholar’s last major work in economics. Offering a detailed account of the equilibrium relationships between inputs and outputs in an economy, Hayek’s stated objective was to make capital theory—which had previously been devoted almost entirely to the explanation of interest rates—“useful for the analysis of the monetary phenomena of the real world.” His ambitious goal was nothing less than to develop a capital theory that could be fully integrated into the business cycle theory.

Bruce Caldwell is research professor of economics and the director of the Center for the History of Political Economy at Duke University. He is the general editor of the Collected Works of F. A. Hayek series, also published by the University of Chicago Press.
“If I had to single out the area in which Hayek's contributions were the most fundamental and pathbreaking, I would cast my vote for the theory of capital. . . . It is my sincere conviction that this work contains some of the most penetrating thoughts on the subject that have ever been published.”
— Fritz Machlup, past president, American Economic Association