Hayek on Mill: The Mill-Taylor Friendship and Related Writings (The Collected Works of F. A. Hayek #16) (Hardcover) 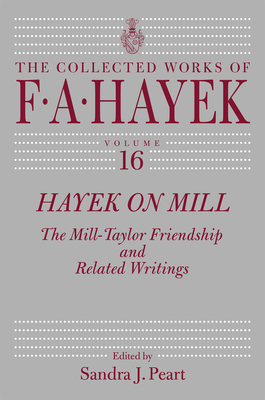 Hayek on Mill: The Mill-Taylor Friendship and Related Writings (The Collected Works of F. A. Hayek #16) (Hardcover)

This is book number 16 in the The Collected Works of F. A. Hayek series.

Best known for reviving the tradition of classical liberalism, F. A. Hayek was also a prominent scholar of the philosopher John Stuart Mill. One of his greatest undertakings was a collection of Mill’s extensive correspondence with his longstanding friend and later companion and wife, Harriet Taylor-Mill. Hayek first published the Mill-Taylor correspondence in 1951, and his edition soon became required reading for any study of the nineteenth-century foundations of liberalism.

This latest addition to the University of Chicago Press’s Collected Works of F. A. Hayek series showcases the fascinating intersections between two of the most prominent thinkers from two successive centuries. Hayek situates Mill within the complex social and intellectual milieu of nineteenth-century Europe—as well as within twentieth-century debates on socialism and planning—and uncovers the influence of Taylor-Mill on Mill’s political economy. The volume features the Mill-Taylor correspondence and brings together for the first time Hayek’s related writings, which were widely credited with beginning a new era of Mill scholarship.

“John Stuart Mill may well be the most important liberal thinker of the nineteenth century. . . . Friedrich Hayek was the twentieth century’s greatest critic of socialism, and he won the Nobel Prize in economics. . . . Against this background, there is every reason to be intrigued by a new book with the title Hayek on Mill. . . . What would Hayek have to say about a great champion of liberty, in some ways his intellectual ancestor, who ended up embracing socialism? . . . [Hayek on Mill] largely consists of a book, first published in 1951, that grew out of an enormous, uncharacteristic, and somewhat obsessive undertaking by Hayek, which was to assemble what remains of the correspondence between Mill and his eventual wife, Harriet Taylor. . . . Does that romance have anything to do with liberalism and liberty? I think so. One of the lessons we can draw from Hayek’s work of excavation is that Mill’s distinctive form of liberalism, with its emphasis on individual freedom from the confining effect of social norms, had a great deal to do with his relationship with Taylor.”

“The details of this indescribable relationship [between John Stuart Mill and Harriet Taylor] were first aired in a book published in 1951 by F. A. Hayek, who would go on to win a Nobel Prize in Economics. It has now been republished, along with ten occasional pieces (one previously unpublished) and some correspondence, as Hayek on Mill.”