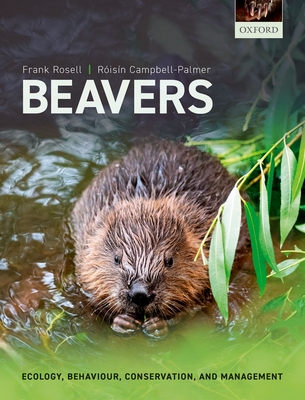 
Available from Our Distributor (Not in Store)
Beavers are represented by two extant species, the Eurasian beaver (Castor fiber) and the North American beaver (Castor canadensis); each has played a significant role in human history and dominated wetland ecology in the northern hemisphere. Their behaviour and ecology both fascinate and perhaps even infuriate, but seemingly never fail to amaze. Both species have followed similar histories from relentless persecution to the verge of extinction (largely through hunting), followed by their subsequent recovery and active restoration which is viewed by many as a major conservation success story. Beavers have now been reintroduced throughout Europe and North America, demonstrating that their role as a keystone engineer is now widely recognised with proven abilities to increase the complexity and biodiversity of freshwater ecosystems. What animals other than humans can simultaneously act as engineers, forest workers, carpenters, masons, creators of habitats, and nature managers? Over the last 20 years, there has been a huge increase in the number of scientific papers published on these remarkable creatures, and an authoritative synthesis is now timely. This accessible text goes beyond their natural history to describe the impacts on humans, conflict mitigation, animal husbandry, management, and conservation. Beavers: Ecology, Behaviour, Conservation, and Management is an accessible reference for a broad audience of professional academics (especially carnivore and mammalian biologists), researchers and graduate students, governmental and non-governmental wildlife bodies, and amateur natural historians intrigued by these wild animals and the extraordinary processes of nature they exemplify.