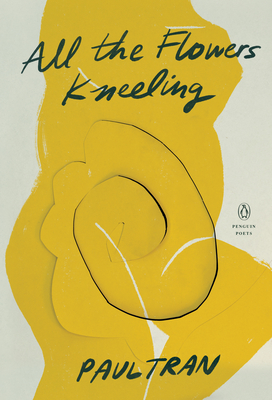 
On Our Shelves Now
“Paul Tran’s debut collection of poems is indelible, this remarkable voice transforming itself as you read, eventually transforming you.” —Alexander Chee, author of How to Write an Autobiographical Novel

A profound meditation on physical, emotional, and psychological transformation in the aftermath of imperial violence and interpersonal abuse, from a poet both “tender and unflinching” (Khadijah Queen)

Visceral and astonishing, Paul Tran's debut poetry collection All the Flowers Kneeling investigates intergenerational trauma, sexual violence, and U.S. imperialism in order to radically alter our understanding of freedom, power, and control. In poems of desire, gender, bodies, legacies, and imagined futures, Tran’s poems elucidate the complex and harrowing processes of reckoning and recovery, enhanced by innovative poetic forms that mirror the nonlinear emotional and psychological experiences of trauma survivors. At once grand and intimate, commanding and deeply vulnerable, All the Flowers Kneeling revels in rediscovering and reconfiguring the self, and ultimately becomes an essential testament to the human capacity for resilience, endurance, and love.
Paul Tran received their BA in history from Brown University and MFA in poetry from Washington University in St. Louis, where they were the chancellor’s graduate fellow and senior poetry fellow. They have been awarded a 2021 Fellowship in Literature from the National Endowment for the Arts, the Ruth Lilly and Dorothy Sargent Rosenberg Fellowship from the Poetry Foundation and the Discovery/Boston Review Poetry Prize. Currently a Wallace Stegner fellow at Stanford University, Paul’s work appears in The New Yorker, Poetry, and elsewhere.
Praise for All the Flowers Kneeling:

“[A] powerful exploration of healing . . . This book is an honest account of the role one can play in pushing forward their own grief – and it teaches us, the readers, to be free.” —NPR, “Books We Love”

“[A] radiant debut collection . . . Tran is brilliant at evoking the ways in which the strata of selfhood illuminate one another . . . mesmerizing, multi-part poem[s] […]articulate, revise, and juxtapose the tales that compose Tran’s identity: Vietnamese parents exiled by the American war, remnants of Buddhist faith, landscapes harried by fiery Santa Ana winds, coming of age as transgender and queer, and the speaker’s attraction to men who are, by turns, gods, masters, and perpetrators of unspeakable violations . . . Tran’s poetry finds its desideratum in the eternal pursuit of self-transcendence.” —The Poetry Foundation

“[E]very so often, a true masterwork seemingly springs forth fully formed as if the goddess Athena, armor flashing and sword raised. Paul Tran’s full-length collection, All the Flowers Kneeling, arrived ready for war. This is an exquisitely crafted labyrinth of a book . . . Each poem stands proudly on its own but also perfectly connects to the narrative arc . . . Tran transmogrifies the grotesque to the gorgeous, the victim to the victor, the oppressed to the liberated.” —Electric Literature

“Unforgettable . . . The aftermath of abuse is met head-on by subtle and delicate skill . . . [Tran's] presence on the page is instantly dramatic: there is a gorgeous sensuality to the writing . . . These poems are flamboyant in content, yet their craftsmanship is as discreet as invisible mending: you will not see the stitches unless you seek them.” —The Guardian

“[A] remarkable book dealing with sexual assault and a survivor’s hard-won journey toward recovery . . . For the speaker, each poem is a step away from a metaphorical death, the realm of silence and shame . . . the reader [comes] to believe that this young survivor will prevail, defined not by the wrongs done to them, but by the courage of their coming forward and giving language to the unbearable . . . [A speaker] says, ‘Yours isn’t just a story about survival...Yours is a story about love.’ The poignant pronouncement summarizes the book perfectly, and it is quite moving to witness the speaker arrive at that truth through self-empowerment and self-love.” —San Francisco Chronicle

“Ultimately this is a book about reclamation, about agency in the face of abuse (at the individual level of relationships, but also at the systemic level), yes, but it’s also a book about beauty, written in beautiful language . . . [All the Flowers Kneeling is] quite a masterful book. It feels like Tran was thoughtful in a smart way about structure . . . This poet’s toolkit is quite remarkable, especially given that this is a first book, and it gives me such high hopes for future work by Tran.” —Los Angeles Review of Books

“Stunning . . . Tran’s expansiveness is a major strength: the collection refuses to be a linear roadmap, providing the reader instead with a vast exploration of the aftermath of trauma . . . Tran’s poems are an antidote to a world that asks us to prioritize progress over reflection, mastery over ambiguity . . . a necessary reminder that states of unknowing, too, are fruitful.” —Ploughshares

“[A] spirit of candor and boldness drives Tran’s debut poetry collection All the Flowers Kneeling . . . bracing and innovative . . . Throughout, their elegant language traces the challenge of trying to pin down violence, to name and exorcise it in the hopes of achieving closure over a story with no resolution . . . All the Flowers Kneeling is ultimately a monument to the self that persists, to the interiority that keeps trying to understand and heal. Amid very real suffering, these poems insist on new futures—especially the unknowable, mysterious, and expansive ones we make for ourselves.” —them.

“With curiosity and compassion, Tran explores the contradictions of the healing process, including its nonlinear path and metamorphic nature, and interrogates their own long held ideas about identity and selfhood in order to discover new truths.” —Harper's Bazaar

“[A] debut that is formidable in scope, form and content. Even with such complex and confident poetic structures and narratives, it’s equally intimate in its vulnerabilities and investigation of the heart, and its ultimate embrace of love. How do we name what is unutterable? How does the unutterable define us?” —Chicago Review of Books

“[R]iveting . . . extraordinary . . . As powerfully as anyone I’ve ever read, Tran captures the manner in which violence inflicted can later be directed by the self upon the self . . . In the face of shame and secrecy, the poet’s candor, lyrical sophistication, and intellectual reach capture the hard work of resilience, the nobility of any soul seeking to save themselves. These poems feel necessary, as all truths are necessary. More than that, they are also beautiful in the way that only art can be simultaneously beautiful and horrific and true . . . a profound act of both grace and will. In the face of unspeakable violation, of sustained exploitation across generations, to tell one’s own story is finally 'the way out', a courageous act of self-avowal.” —Ralph Hamilton, RHINO Poetry

“Paul Tran’s debut collection of poems is indelible, this remarkable voice transforming itself as you read, eventually transforming you. I felt at times a passenger, a ghost, implicated, consumed, and ultimately delivered back to myself, renewed.” —Alexander Chee, author of How to Write an Autobiographical Novel

“[Tran has] reached new heights . . . [These poems] communicate trauma, violence, lost homes, and lost selves with a tenderness and understanding that softens the rough realities they encompass . . . it’s [the] promise of survival—even during the hardest, messiest, most traumatic moments—that makes Tran’s work so moving. Even when it is difficult to read, it is beautiful.” —St. Louis Magazine

“[An] ode to survival, both painful and playful. The sheer beauty of the language in these poems left me breathless and stunned. This is definitely a collection I’ll return to again and again.” —BookRiot

“Tran handles the sexual violence that the speaker and their mother experience with the utmost care and tender language, conveying the collection’s themes of survival and love . . . Importantly, Tran’s debut collection testifies that the younger Vietnamese generation inherits more than war history and trauma. We receive survival tactics, lessons of pressing on and loving, from our Vietnamese elders and their journeys.” —diaCRITICS

“This much-anticipated debut from Tran investigates American imperialism, sexual assault, intergenerational trauma, and the complexities of trauma recovery . . . the poems here relating these stories are breathtaking, thought-provoking, and fearlessly honest, encapsulating tumultuous lows that will make readers shudder . . . [While] pain is vividly captured, there is also an undercurrent of strength and perseverance within the voices . . . Readers will be sure to find connection and refuge within Tran's standout collection. Highly recommended.” —Library Journal (starred review)

“[S]tunning . . . Formally inventive, Tran includes a series of persona poems written from the perspective of cadavers used in sixteenth-century anatomical studies, some whose skin was supposedly used to bind books. They also introduce a new form, the hydra, which seeks to ‘resist as much as possible the psychological impulse to reach for closure and certitude.’ A darkly intelligent and exquisite debut.” —Booklist (starred review)

“[Tran] tell[s] hard truths with clarity while exploring the legacy of American imperialism and the effects of sexual violence on the body, mind, and imagination . . . Tran’s poems are curious and searching, especially as they wrestle with the contradictions of trauma recovery . . . These poems embody a spirit of inquiry in their forms, too, many of which are Tran’s own. Each provides a unique doorway into the subject matter . . . These searingly honest, beautifully told depictions of survival and self-love will move and challenge readers.” —Publishers Weekly

“In All the Flowers Kneeling, Paul Tran writes from that most essential of places: the threshold. Between grief and love, past and future, trauma and luminous survival, these are searching, generous poems that enact the resilience of the human spirit, how the art of language making—story, truth telling—allows us not only to survive but thrive. This is a stunning debut.” —Natasha Trethewey, author of Thrall

“Ravishing was the word that came to my mind the first time I read Paul Tran’s impressive debut collection—Ravishing, as in gorgeous; ravishing, as in carried away; to ravish: to drag off by force; to plunder. All the Flowers Kneeling is an extended investigation into what William James called traumata, ‘thorns in the spirit,’ and Tran is our compassionate, exacting, guide: ‘By my own / Invention, I found a way. I’m no artifact. Between art and fact: I.’ Formally inventive, psychologically acute, unafraid to address the complex dynamics of relational trauma both inherited and experienced, Tran’s debut demonstrates the capacity of poetry to tell the truths which will set you free.” —Dana Levin, author of Banana Palace

“All The Flowers Kneeling is a gorgeous debut that names and resists the difficult chiasmus of trauma. Out of violences intimate and imperial, out of survival and self-fashioning, Paul Tran sculpts new forms to contain all. This book is a richness. What a stellar poet for our day.” —Solmaz Sharif, author of Look

“‘Who / can deter- / mine what’s inside / another? What is risked / when we enter?’ asks Paul Tran in their masterful debut All the Flowers Kneeling, an elegant meditation on many things—history, inheritance, language, trauma, how the self tricks the self, defiance—but maybe especially about penetration in its doubleness, both as violation and as relentless inquiry, an insistence on knowing. In poems as virtuosic in their thinking as in their prosodic inventiveness, Tran interrogates meaning itself. Do suffering and knowing go together—must they? Can a story about surviving be the same as a story about love? ‘Wasn’t the word for injury the same in Vietnamese as the word for love?’ Do we survive the past, or merely leave it behind? The gift of these poems lies in their heroic refusal to accept—or indeed to offer up—the usual, too-easy answers. ‘A poem is a mirror / I use to look / not at but into myself. / My story. / Mystery.’ All the Flowers Kneeling maps the journey past bewilderment, to knowing, to, finally, the mystery of unknowing, where history falls away, where—bravely, stripped equally of regret and apology—the life we get to choose for ourselves begins.” —Carl Phillips, author of Pale Colors in a Tall Field