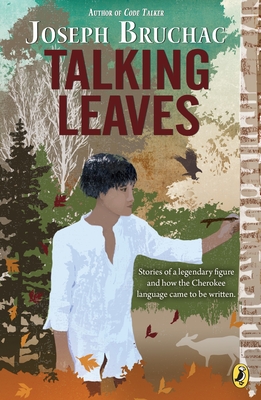 
On Our Shelves Now
A work of historical fiction about Sequoyah and the creation of the Cherokee alphabet, from the acclaimed author of Code Talker

Thirteen-year-old Uwohali has not seen his father, Sequoyah, for many years. So when Sequoyah returns to the village, Uwohali is eager to reconnect. But Sequoyah’s new obsession with making strange markings causes friends and neighbors in their tribe to wonder whether he is crazy, or worse—practicing witchcraft. What they don’t know, and what Uwohali discovers, is that Sequoyah is a genius and his strange markings are actually an alphabet representing the sounds of the Cherokee language.

The story of one of the most important figures in Native American history is brought to life for middle grade readers. This text includes a note about the historical Sequoyah, the Cherokee syllabary, a glossary of Cherokee words, and suggestions for further reading in the back matter.


* “Bruchac has crafted a tale of depth and universal humanity in this fictionalized account of Sequoyah, the creator of the Cherokee syllabary, and his son, Jesse." —School Library Journal, starred review

“Although the particulars of the novel occur two hundred years ago, the universality of fitting into a blended family and looking for love and acceptance from a once-absent father feel strikingly contemporary." —Horn Book

"A vivid retelling of a pivotal time for the Cherokee nation.” —Kirkus Reviews

Joseph Bruchac is a highly acclaimed children's book author, poet, novelist and storyteller, as well as a scholar of Native American culture. Coauthor with Michael Caduto of the bestselling Keepers of the Earth series, Bruchac's poems, articles and stories have appeared in hundreds of publications, from Akwesasne Notes and American Poetry Review to National Geographic and Parabola. He has authored many books for adults and children including Code Talker: A Novel About the Navajo Marines of World War Two, Skeleton Man, and The Heart of a Chief. For more information about Joseph, please visit his website josephbruchac.com.
Praise for Talking Leaves

*"A tale of depth and universal humanity. . . .This is a strong middle grade novel that offers a needed perspective on Cherokee history and the life of a key historical figure." — School Library Journal,starred review

"Themes of preserving identity and culture through both spoken and written language will appeal to readers of all ages. A vivid retelling of a pivotal time for the Cherokee nation." — Kirkus Reviews

"Although the particulars of the novel occur two hundred years ago, the universalityof fitting into a blended family and looking for love and acceptance from aonce-absent father feel strikingly contemporary." — The Horn Book

“Based on historical events, Bruchac’s (Killer of Enemies) lyrical novel is filled with myths and fables that serve as guides for Uwohali as he comes to understand the importance of his father’s creation. Wrenching descriptions of the 1814 Battle of Horseshoe Bend help transform an ostensibly simple story into a profound cautionary tale of what can happen without a language of one’s own." —Publishers Weekly

“Uwohali’s voice is perfectly pitched as a boy whose certainty in his identity (as his mother’s son and a Tsalagi boy) is shaken by the arrival (or return, in this case) of a new dynamic that casts what he has previously believed in a different light. . . .This is as much a story about fathers and sons as it is about the legendary Sequoyah’s hugely significant work, and it offers multiple points of access for history buffs or fans of family dramas."  —BCCB