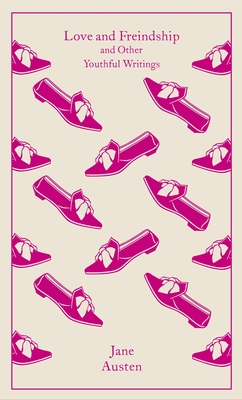 Jane Austen’s earliest writing dates from when she was just eleven-years-old, and already shows the hallmarks of her mature work. But it is also a product of the times in which she grew up—dark, grotesque, often surprisingly bawdy, and a far cry from the polished, sparkling novels of manners for which she became famous. Drunken heroines, babies who bite off their mothers’ fingers, and a letter-writer who has murdered her whole family all feature in these highly spirited pieces. This edition includes all of Austen’s juvenilia, including her “History of England” and the novella Lady Susan, in which the anti-heroine schemes and cheats her way through high society. With a title that captures a young Austen’s original idiosyncratic spelling habits and an introduction by Christine Alexander that shows how Austen was self-consciously fashioning herself as a writer from an early age, this is a must-have for any Austen lover.

JANE AUSTEN (1775–1817) was the seventh child of the rector of the parish. The novels published in Austen’s lifetime include Sense and Sensibility,Pride and Prejudice, Mansfield Park, and Emma. Persuasion and Northanger Abbey were published after her death.

CHRISTINE ALEXANDER is the Scientia Professor of English at the University of New South Wales, and the general editor of the Juvenilia Press.

CORALIE BICKFORD-SMITH is an award-winning designer at Penguin Books (U.K.), where she has created several highly acclaimed series designs. She studied typography at Reading University and lives in London.

"The kind of thing any casual Austen lover (which should be all of us, if we are human beings who can read) can leave on his or her coffee table. It’s perfect to pick up at any given moment, flip through and enjoy the page before you, thinking all the while about a teenage girl in the British countryside over 200 years ago, who is still making us crack up with her imagination and wit.”
--Flavorwire

"Finely produced...for anyone languishing with a broken heart there is no better tonic than the comedy - and indeed the cathartic violence - of Jane Austen's youthful writings."
--Times Literary Supplement


"Had she written nothing but these early squibs, the author of “Frederic and Elfrida” might be remembered by a few scholars as a kind of eccentric girl genius—the Stevie Smith of 18th-century fiction. Instead, we have the extraordinary pleasure of seeing the greatest novelist in our language goofing off."
--The Washington Free Beacon