I Am a Star: Child of the Holocaust (Paperback) 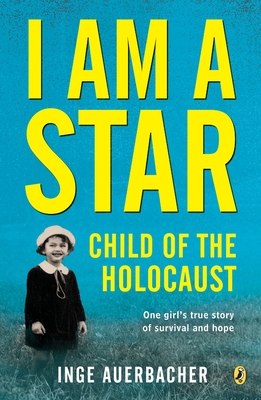 Inge Auerbacher’s childhood was as happy and peaceful as that of any other German child—until 1942. By then, the Nazis were in power, and because Inge’s family was Jewish, she and her parents with sent to a concentration camp in Czechoslovakia. The Auerbachers defied death for three years, and were finally freed in 1945. In her own words, Inge Auerbacher tells her family’s harrowing story—and how they carried with them ever after the strength and courage of will that allowed them to survive.

“A moving story . . . [The author’s] perspective, while chilling, pierces the heart with memorable imagery.” —Publishers Weekly

Inge Auerbacher was born in Kippenheim, Germany. In 1942, at the age of seven, she was imprisoned in the Terezin concentration camp in what is now known as the Czech Republic. In 1946, she emigrated to the United States of American and has live in New York City ever since.
Inge graduated from Queens College with a B.S. degree in chemistry, and continued with post-graduate work in biochemistry. She worked for over thirty-eight years as a chemist with prominent scientists in research and clinical work.
In addition to being a chemist, world traveler, travel writer, and avid photographer, Inge is also a writer. More than fifty of her poems and numerous articles have been published. She wrote the lyrics “We Shall Never Forget,” the only original song presented at the first World Gathering of Jewish Holocaust Survivors in Jerusalem (1981).
Since 1981, Inge has been lecturing on the Holocaust, and has spoken to thousands of people all over the world. She has also appeared on many radio and television programs, and her story is the subject of the award-winning documentary film The Olympic Doll, directed by Gloria Gerzon.
Inge Auerbacher is the recipient of the Ellis Island Medal of Honor and the Louis E. Yavner Citizen Award.

Find out more about Inge Auerbacher at ingeauerbacher.com

Praise for Inge Auerbacher and I Am a Star

“Inge Auerbacher’s second narrative—about the miraculous rebirth of hope in the heart of Jewish children—is as absorbing and as moving as her first testimony [I Am a Star].—Elie Wiesel, Nobel Prize Winning author of Night on Beyond the Yellow Star to America

“Deeply moving and true . . . I cannot think of any book on this topic which I could recommend for this age group as I do this book.”—Bruno Bettelheim, celebrated child psychologist and author

“This account of one girl's Holocaust experience is rich for its interweaving of autobiography and historical data . . . A moving story . . . [The author’s] perspective, while chilling, pierces the heart with memorable imagery.”—Publishers Weekly on I Am a Star

“While the author’s story is personal, there is recognition of the Nazi toll on non-Jews as well as non-Jewish resistance to the ongoing horrors . . . This account will be a revelation of manageable proportions to middle-grade readers, especially those who already know Anne Frank’s story.”—Booklist on I Am a Star

“Auerbacher's poems, incorporated into the text . . .  give a child's perspective on the horrendous conditions in Theresienstadt without bitterness or pessimism.”—School Library Journal on I Am a Star

“A small treasure.”—The Jewish Week on I Am a Star