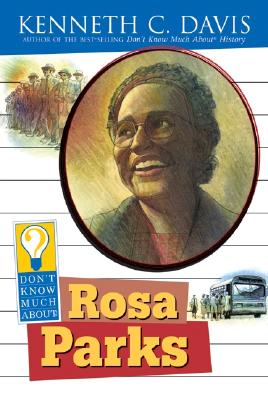 How did Rosa Parks get around Montgomery during the bus boycott?

In his trademark question-and-answer format, best-selling author Kenneth C. Davis sensitively describes the life of one brave woman who quietly fought for what she believed in. Rosa Parks was arrested after she refused to give up her seat on the bus to a white person. But she had been fighting the laws that separated blacks and whites for a long time. This biography is peppered with informational sidebars and compelling quotes. Noteworthy photographs and dramatic black-and-white illustrations by Sergio Martinez help capture Rosa Parks's decisive courage, as well as the turbulence of the era in which she lived.

Kenneth C. Davis is the New York Times bestselling author of A Nation Rising; America's Hidden History; and Don't Know Much About® History, which spent thirty-five consecutive weeks on the New York Times bestseller list, sold more than 1.7 million copies, and gave rise to his phenomenal Don't Know Much About® series for adults and children. A resident of New York City and Dorset, Vermont, Davis frequently appears on national television and radio and has been a commentator on NPR's All Things Considered. He blogs regularly at www.dontknowmuch.com.

Sergio Martinez was born and lives in Mexico City. He illustrated Weapons & Warfare by Milton Meltzer. His paintings have been exhibited in galleries around the world.

“Organized in the author’s trademark question-and-answer format, these biographies have sure appeal for reluctant readers.”
— Booklist