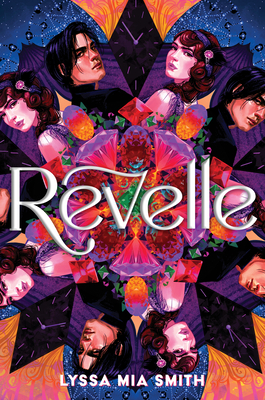 Inspired by Moulin Rouge! and set on an island in a magical version of Prohibition-era New York, Revelle is a breathtaking YA stand-alone fantasy full of dazzling magic, romance, and mystery from debut author Lyssa Mia Smith.

On the island of Charmant, magic flows like bootlegged champagne, and fantasies can be bought for the price of a gemstone.

Luxe Revelle, star of her family’s fantastical show, knows the splendor is just an illusion. With Prohibition threatening their livelihood, her family struggles to make a living, watering down champagne and patching holes in their sequined costumes. So when the son of Charmant’s wealthiest family makes her an offer—everything the Revelles need to stay in business, in exchange for posing as his girl and helping him become mayor—she can’t refuse.

The moment Jamison Port sets foot in Charmant, he can’t shake the feeling of familiarity. An orphan with as few memories as gemstones, he’s desperate to learn what happened to his parents. But as he delves into the island’s secrets, he risks angering the wrong person and discovering a truth that just might break his heart.

When Luxe and Jamison accidentally meet, the sparks that fly are more than her magical enchantments. But keeping secrets from powerful people is a dangerous game . . . one that could destroy them both.

Lyssa Mia Smith is an author of romantic fantasies and a fan of all things magical and heart-wrenching. She has a PhD in clinical psychology with an expertise in adolescent trauma. A lifelong New Yorker, she lives on Long Island with her partner and their two young children, who keep her busy hunting for insects against her will. Revelle is her debut novel.

"Full of magic and twists, Revelle will leave you breathless!" — Lauren Blackwood, New York Times Bestselling author of Within these Wicked Walls

"From beginning to end, Revelle is a fantastical tale in which a glittering world converges with a dynamic and absolutely enchanting cast of characters. Readers will delight in the prowess and cleverness of Smith's prose."  — Ayana Gray, New York Times bestselling author of the Beasts of Prey trilogy

“Revelle is a jewel of a debut, as glittering and gritty as its Roaring Twenties setting. Lyssa Mia Smith has written a real showstopper, with a romance that’s both sizzling and sweet, wildly imaginative worldbuilding, and twists that crescendo to a thrilling finale. I couldn’t read it fast enough!”  — Allison Saft, New York Times bestselling author of A Far Wilder Magic

“Revelle sparkles with its swoon-worthy leads, death-defying magic, and an ending that had me reading into the night. It's the perfect fantasy for fans of Moulin Rouge. — Emily J. Taylor, New York Times bestselling author of Hotel Magnifique

“The lush, glittering descriptions of this Moulin Rouge!–based fantasy will hook readers from the very first page. Debut author Smith is one to watch.” — Booklist