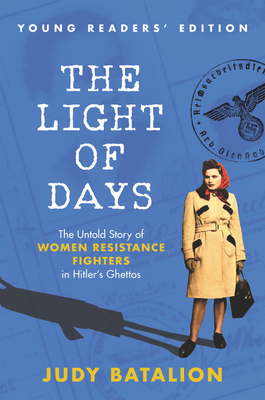 This young readers’ edition of the blockbuster New York Times bestseller is the remarkable untold story of the young Jewish women who became resistance fighters against the Nazis during World War II. It has already been optioned by Steven Spielberg for a major motion picture.

As their communities were being destroyed, groups of Jewish women and teenage girls across Poland began transforming Jewish youth groups into resistance factions. These “ghetto girls” helped build systems of underground bunkers, paid off the Gestapo, and bombed German train lines.

At the center of the book is eighteen-year-old Renia Kukielka, who traveled across her war-torn country as a weapons smuggler and messenger. Other women who joined the cause served as armed fighters, spies, and saboteurs, all risking their lives for their missions.

Never before chronicled in full, this is the incredible account of the strong Jewish women who fought back against the seemingly unstoppable Nazi regime. It follows the women through arrests, internment, and for a lucky few, into the late 20th century and beyond.

It also includes an eight-page insert of black-and-white photos, so that readers can see firsthand the extraordinary women who bravely fought for their freedom in the face of overwhelming odds.

Judy Batalion is the New York Times bestselling author of the highly-acclaimed THE LIGHT OF DAYS: The Untold Story of Women Resistance Fighters in Hitler’s Ghettos, published by William Morrow in April 2021. THE LIGHT OF DAYS has been published in a young readers’ edition, will be translated into nineteen languages, and has been optioned by Steven Spielberg for a major motion picture for which Judy is co-writing the screenplay. Judy is also the author of White Walls: A Memoir About Motherhood, Daughterhood and the Mess in Between, optioned by Warner Brothers, and her essays have appeared in the New York Times, the Washington Post, the Forward, Vogue, and many other publications. Judy has a BA in the History of Science from Harvard, and a PhD in the History of Art from the Courtauld Institute, University of London, and has worked as a museum curator and university lecturer. Born in Montreal, where she grew up speaking English, French, Hebrew, and Yiddish, she lives in New York with her husband and three children.