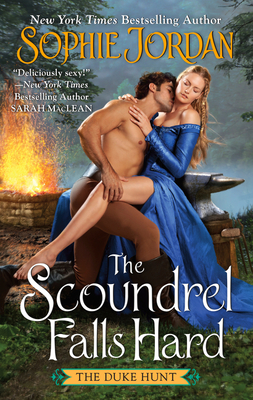 This is book number 3 in the Duke Hunt series.

New York Times bestselling author Sophie Jordan is back with the enchanting third book in the Duke Hunt series about a marriage of convenience between a fierce female blacksmith and a handsome scoundrel.

A devil’s bargain burns the hottest….

For years, fiercely independent Gwen Cully has worked as the village blacksmith, keeping her family’s business going. But when a local rival threatens her livelihood, Gwen has nowhere to turn ... until a devastatingly handsome fugitive takes shelter in her shop and sparks fly.

Unrepentant rogue Kellan Fox’s entire existence has been a dangerous game of deception that leads him into a fight for survival—and straight into the arms of a tall, fiery beauty. When Gwen protects him from an angry mob of villagers, Kellan sees the perfect solution to both their troubles. A marriage—in name only—that will last a single year.

Only a marriage of convenience can’t hide their searing attraction. It glows hotter than Gwen’s forge and reaches deep below the tempting mask Kellan wears for the world. With every sizzling glance and scorching kiss, Gwen surrenders more of herself to the molten passion she finds in Kellan’s strong embrace. But can she ever truly trust her heart to a scoundrel?

Sophie Jordan grew up in the Texas hill country where she wove fantasies of dragons, warriors, and princesses. A former high school English teacher, she’s the New York Times, USA Today, and international bestselling author of more than thirty novels. She now lives in Houston with her family. When she’s not writing, she spends her time overloading on caffeine (lattes preferred), talking plotlines with anyone who will listen (including her kids), and cramming her DVR with anything that has a happily ever after.

“[Sophie Jordan] launches the Duke Hunt Victorian romance series with an enticing premise and a dashing hero.”  — Publishers Weekly on The Duke Goes Down

“Jordan’s writing is often lovely, the setting is charming, and there are intriguing secondary characters.”  — Kirkus Reviews on The Duke Goes Down

“[A] great start for the series. It was well written with a slow-burn romance between two enemies.”  — Harlequin Junkie on The Duke Goes Down

“With Alyse, Jordan crafts a fiery, lovable heroine who craves more affection and opportunity than life has given her. The author matches fire with fire... The bedroom scenes are Jordan’s forte, with the overwhelming desire of the characters blazing off the page.”
— Entertainment Weekly on The Duke’s Stolen Bride

“A powerful aphrodisiac upends a battle of wills between a taciturn colonel and a prickly herbalist . . . Interesting premise and likable characters shine.”
— Kirkus Reviews on The Duke Effect