Freakonomics Revised and Expanded Edition: A Rogue Economist Explores the Hidden Side of Everything (Paperback) 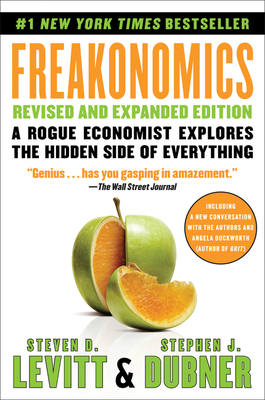 Freakonomics Revised and Expanded Edition: A Rogue Economist Explores the Hidden Side of Everything (Paperback)

The legendary bestseller that made millions look at the world in a radically different way returns in a new edition, now including an exclusive discussion between the authors and bestselling professor of psychology Angela Duckworth.

Which is more dangerous, a gun or a swimming pool? Which should be feared more: snakes or french fries? Why do sumo wrestlers cheat? In this groundbreaking book, leading economist Steven Levitt—Professor of Economics at the University of Chicago and winner of the American Economic Association’s John Bates Clark medal for the economist under 40 who has made the greatest contribution to the discipline—reveals that the answers. Joined by acclaimed author and podcast host Stephen J. Dubner, Levitt presents a brilliant—and brilliantly entertaining—account of how incentives of the most hidden sort drive behavior in ways that turn conventional wisdom on its head.

Steven D. Levitt, a professor of economics at the University of Chicago, was awarded the John Bates Clark Medal, given to the most influential American economist under forty. He is also a founder of The Greatest Good, which applies Freakonomics-style thinking to business and philanthropy.

Stephen J. Dubner, an award-winning journalist and radio and TV personality, has worked for the New York Times and published three non-Freakonomics books. He is the host of Freakonomics Radio and Tell Me Something I Don't Know.

Stephen J. Dubner is an award-winning author, journalist, and radio and TV personality. He quit his first career—as an almost rock star—to become a writer. He has since taught English at Columbia, worked for The New York Times, and published three non-Freakonomics books.

“If Indiana Jones were an economist, he’d be Steven Levitt… Criticizing Freakonomics would be like criticizing a hot fudge sundae.” — Wall Street Journal

“The funkiest study of statistical mechanics ever by a world-renowned economist... Eye-opening and sometimes eye-popping” — Entertainment Weekly

“Steven Levitt has the most interesting mind in America... Prepare to be dazzled.” — Malcolm Gladwell, author of Blink and The Tipping Point

“Principles of economics are used to examine daily life in this fun read.” — People: Great Reads

“Levitt is one of the most notorious economists of our age.” — Financial Times

“Freakonomics is politically incorrect in the best, most essential way.... This is bracing fun of the highest order.” — Kurt Andersen, host of public radio's Studio 360 and author of Turn of the Century

“An eye-opening, and most interesting, approach to the world.” — Kirkus Reviews

“A showcase for Levitt’s intriguing explorations into a number of disparate topics…. There’s plenty of fun to be had.” — Salon.com

“One of the decade’s most intelligent and provocative books.” — The Daily Standard

“The trivia alone is worth the cover price.” — New York Times Book Review

“An easy, funny read. Many unsolvable problems the Americans have could be solved with simple means.” — Business World

“Economics is not widely considered to be one of the sexier sciences.... Steven D. Levitt will change some minds.” — Amazon.com