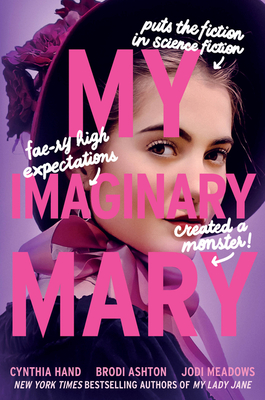 It’s aliiiiiiiive! New York Times bestselling authors of My Lady Jane are back with the electric, poetic, and (almost) historical tale of the one and only Mary Shelley.

Mary may have inherited the brilliant mind of her late mother, Mary Wollstonecraft, but she lives a drab life above her father’s bookstore, waiting for an extraordinary idea that’ll inspire a work worthy of her parentage—and impress her rakishly handsome (and super-secret) beau, Percy Shelley.

Ada Lovelace knows a thing or two about superstar parents, what with her dad being Lord Byron, the most famous poet on Earth. But her passions lie far beyond the arts—in mechanical engineering, to be exact. Alas, no matter how precise Ada’s calculations, there’s always a man willing to claim her ingenious ideas as his own.

Pan, a.k.a. Practical Automaton Number One, is Ada's greatest idea yet: a machine that will change the world, if only she can figure out how to make him truly autonomous . . . or how to make him work at all.

When fate connects our two masterminds, Mary and Ada learn that they are fae—magical people with the ability to make whatever they imagine become real. But when their dream team results in a living, breathing, thinking PAN, Mary and Ada find themselves hunted by a mad scientist who won't stop until he finds out how they made a real boy out of spare parts.

With comic genius and a truly electrifying sense of adventure, Cynthia Hand, Brodi Ashton, and Jodi Meadows continue their campaign to turn the classics on their head in this YA fantasy that’s perfect for fans of Frankenstein and The Gentleman’s Guide to Vice and Virtue.

Cynthia Hand is the New York Times bestselling author of several books for teens, including the Unearthly trilogy, The Afterlife of Holly Chase, The Last Time We Say Goodbye, and My Lady Jane and My Plain Jane (with fellow authors Brodi Ashton and Jodi Meadows). She currently resides in Boise, Idaho, with her husband, who loves typewriters as much as she does, two cats, two kids, one crazy dog, and a mountain of books. Visit her online at www.cynthiahandbooks.com.

BRODI ASHTON is the author of Everneath, a VOYA Perfect 10 for 2011; Everbound; and Evertrue; and the coauthor, with Cynthia Hand and Jodi Meadows, of My Lady Jane. She received a bachelor’s degree in journalism from the University of Utah and a master’s degree in international relations from the London School of Economics. Brodi lives in Utah with her family. You can visit her online at www.brodiashton.blogspot.com

Jodi Meadows wants to be a ferret when she grows up and she has no self-control when it comes to yarn, ink, or outer space. Still, she manages to write books. She is the author of the Incarnate trilogy, the Orphan Queen duology, and the Fallen Isles trilogy and coauthor of the New York Times bestsellers My Lady Jane, My Plain Jane, and My Calamity Jane. Visit her at www.jodimeadows.com.

★ “Energetic, clever, and absorbing. The authors responsible for this entertaining smashup series get better with every book they write.” — Kirkus Reviews (starred review)

Praise for My Calamity Jane: “Witty and winsome, this rollicking tall tale makes its own rules.”
— Booklist (starred review)

Praise for My Plain Jane: “The authors’ affection for their source material is abundantly clear in this clever, romantic farce.” — Publishers Weekly (starred review)

“A delightfully deadpan deconstruction of a Gothic novel, with a ghost almost no one can see providing the commentary. Marvelously self-aware and almost too clever for its own good.” — ALA Booklist (starred review)

“A madcap story of ghosts, possession, revenge, and murder. Humorously blends fact with fiction and offers a gentler, more hopeful outcome for Charlotte, her siblings, and her heroine.” — School Library Journal (starred review)

Praise for My Lady Jane: “Wacky, irreverent, and just plain fun. This fantasy-adventure politely tips its hat to history before joyfully punting it out of the way. An utter delight.” — Booklist (starred review)

“An uproarious historical fantasy that’s not to be missed." — Publishers Weekly (starred review)