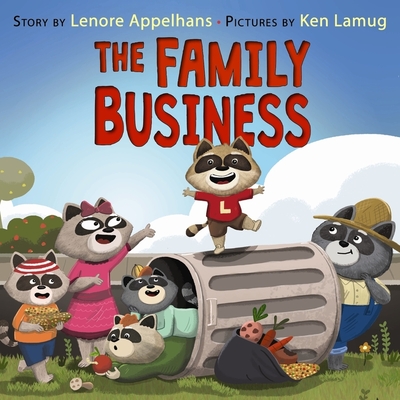 A young raccoon forges his own path in this laugh-out-loud read-aloud picture book!

Lucky is a racoon who loves to dance, watch TV, and dream of the day he’s big enough to join the family business. But when Lucky finally gets his chance, his first day on the job isn’t exactly what he expects.

And so begins a hilariously rude awakening as Lucky discovers exactly what his family has been up to this entire time. Is there a way to honor his family's expectations while following his heart?

Author Lenore Appelhans's well-paced story is full of refrains and builds to a surprising finish and Ken Lamug's adorable artwork brings this special raccoon and his boisterous family to life. Perfect for fans of Gaston and Wolfie the Bunny, Lucky's journey is about the difficulty of balancing family expectations and being true to yourself.

Lenore Appelhans loves dancing almost as much as Lucky and would jump at the chance to dance with raccoons. Her father served in the United States Air Force, which gave Lenore an early taste of wanderlust, and to date she has visited over seventy countries. Lenore holds an MFA in creative writing from Vermont College of Fine Arts and is the author of several teen novels. Her debut picture book, Chick-o-Saurus Rex, was illustrated by Daniel Jennewein and was called “a good-hearted romp” by the New York Times. Lenore lives and writes near Washington, DC.

Ken Lamug grew up in the Philippines and is the oldest of five kids. His parents’ “family business” was running a small convenience store just in front of their house. They sold snacks, rented movies, and even had their own photocopier. While he was helping in the store, Ken would often draw on leftover scraps of paper and make them into comics. An author and illustrator of picture books and graphic novels, Ken’s books include the hilarious middle grade graphic novel Mischief and Mayhem: Born to Be Bad. Find out more at www.rabbleboy.com.

Kids will get a kick out of the awful food the family eats and the satisfying solution to Lucky’s problem. — School Library Journal