I Love You Because I Love You: A Valentine's Day Book For Kids (Hardcover) 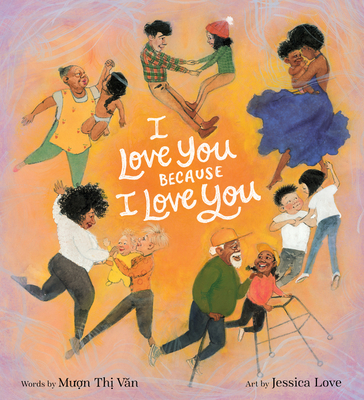 I Love You Because I Love You: A Valentine's Day Book For Kids (Hardcover)

“This sweet story will make a great baby gift, graduation gift, or everyday story. Perspective from both sides of loving pairs invite children in to the story, different from many books of this type that focus on parent to child love alone.”
— Hannah Amrollahi, The Bookworm of Omaha, Omaha, NE

Author Muợn Thị Văn and Stonewall Book Award-winning artist Jessica Love detail all the big and small reasons why we love the people we do within a call-and-response picture book that features families across the spectrum.

“I love you because you tell the best stories.

Because I love you, my best story is you.”

What are all the big and small reasons why we love the people we do? And what does it look like when we voice it out loud?

To be read aloud by one or even two people, this affirming prose demonstrates that love is a dialogue. Love is complex. Love is utterly simple.

Muon Thi Van stitches stories by starlight and by daylight. Some of these stories become books, and some of these books are read around the world. From her debut, In a Village by the Sea, illustrated by April Chu, to Wishes, illustrated by Victo Ngai, Muon's books have received many distinctions. Muon’s best stories, though, are her three children; together they live and grow in California.

Jessica Love is an actor and artist with a degree in fine arts from University of California, Santa Cruz and a degree in drama from the Juilliard School. Jessica’s first book, Julián Is a Mermaid, was published in 2018 and was the recipient of the Stonewall Book Award. Jessica lives with her sweetheart in Upstate New York.

"Beautifully written and illustrated, this title presents and grows the concept of love in so many ways that it cannot fail to inspire children to assess the ways they share love and are affected by it." — School Library Journal (starred review)

“In this call-and-response celebration of love’s power to grow and endure, individuals in inclusive pairs tell the other what their bond means to them. All are drawn with grace and humor. Throughout, words and images testify to acceptance, joy, and intimacy over time, and they are worth visiting again and again.” — Publishers Weekly

"Love is what makes the world go round. Tender and emotive . . . the book gently teases out the relationship between love and various qualities like playfulness, emotional strength, forgiveness, courage, and loyalty. An inclusive, affirming, warmhearted book with lots to love." — Kirkus Reviews

Praise for Julián is a Mermaid: "This is Jessica Love’s debut picture book, and every choice she makes — the spare text, a color palette both muted and lively, full-bleed pages that make even subway cars and apartment rooms feel as expansive as the ocean — imbues the story with charm, tenderness and humor…Alongside Julián, readers learn that anyone can be a mermaid: All it takes is love and acceptance, a little imagination and a big swishy tail." — New York Times Book Review

"Refreshingly, Spanish words aren't italicized. Though it could easily feel preachy, this charmingly subversive tale instead offers a simple yet powerful story of the importance of being seen and affirmed." — Kirkus Reviews (starred review)

"[Julian] is, in a word, fabulous. Love lets an anxious beat pass before Abuela takes Julián by the hand, leading him to what some readers may recognize as the Coney Island Mermaid Parade. “Like you, mijo,” says Abuela. “Let’s join them.” Love’s deep empathy for her characters and her keen-eyed observations of urban life come together in a story of love, understanding, and embracing the mermaid within us all." — Publishers Weekly (starred review)

"The luminous, lovely, and layered art is what really makes the book...The concluding parade is a confectionary wonder of marine fantasy that many kids will yearn to join, and it might prompt adults to set up their own in- library mermaid celebrations. More importantly, though, those who’ve been shy about their love for dazzle and showmanship will love the idea of a formidable grandparental ally, and they will find this encouraging and empowering." — Bulletin of the Center for Children’s Books (starred review)

"Julián’s emotional journey takes on depth through small but important details: a wary look in the mirror, a slight inward slump of the shoulders, a chin held high while marching down the street. Love uses vibrant watercolors with gouache and ink and a lively style to create scenes that splash and swirl to life on the page." — Horn Book (starred review)

"Across her watercolor, gouache and ink spreads, Love captures the transformative power of being seen...Love's affecting combination of the literary and the visual results in a powerful affirmation of individuality, creative expression and unconditional acceptance." — Shelf Awareness

"Love’s painted scenes glow against muted backgrounds, with saturated, opaque tones tracing the graceful shapes of the figures. They’re especially striking when Julián gets swept away in a vivid underwater fantasy: a school of sea creatures whirls around him as he transforms into a mermaid. That scene is nicely replicated when he arrives at the parade, which is populated by scores of people in a wide variety of inventive costumes. The affectionate depiction of a broad range of body types and skin tones makes this particularly cheery." — Booklist

"This beautiful book is one of the very few picture books about a gender non-conforming child. Yet it feels like a celebration of all children who want to do things differently than the parental figures in their lives—and a love letter to the grownups who deeply understand them." — Gothamist

"There is nothing about this book that is forgettable. In fact, you may have a hard time not thinking long and hard about it after you put it down. A book for mermaids and boys and girls and parents and teachers and booksellers and librarians and . . . Let’s just simplify things and say it’s a book for the human race." — Betsy Bird

"Jessica Love’s vivid watercolor and gouache illustrations are made even brighter by her decision to paint on brown paper; the richly colored palette pops off the pages, and abundant character is conveyed via the subtlest of facial expressions and body language. Also subtle—and terrifically poignant—is the eloquent encouragement of Abuela’s spare words. A book for the ages, Julián Is a Mermaid is going to make a big splash." — BookPage

"Groundbreaking...here’s a happy picture book that challenges traditional gender stereotypes, rendering one boy free to be himself." — San Francisco Chronicle

Praise for In a Village by the Sea: “A lovely, resonant portrait of family life that hums with quiet magic." — Publishers Weekly (starred review)

Praise for If You Were Night: "A quirky but appealing story, suited for a one-on-one bedtime reading or inspiring imaginations in story hours." — School Library Journal

"Librarians, teachers and parents will enjoy using If You Were Night to reinforce the use of colourful vocabulary, to talk about the life of the nighttime world, and just for its reassuring tone as a bedtime lilt." — CM Magazine

Praise for One Is a Lot: “One unique picture book with much to say equals quite a lot." — Kirkus Reviews (starred review)