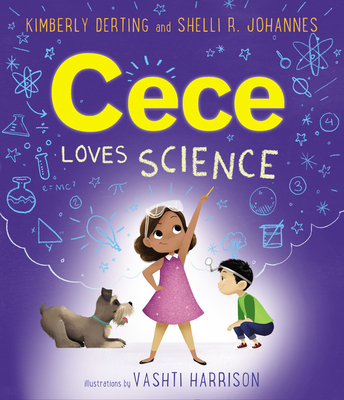 This is book number 1 in the Cece Loves Science series.

Cece loves science! In this STEM-themed picture book, Cece asks one of life’s most pressing questions: Do dogs eat vegetables? Cece and her best friend, Isaac, head to the lab to find out.

This picture book is perfect for fans of Ada Twist, Scientist, and anyone who enjoys asking questions.

Cece’s parents say she was born curious. She asks: Why? How? What if? When her teacher, Ms. Curie, assigns a science project, Cece knows just what to ask—do dogs eat vegetables? She teams up with her best friend, Isaac, and her dog, Einstein, to discover the answer. They investigate, research, collect data, and analyze, using Einstein as their case study. Their final conclusion is surprising, and a lot of fun!

Illustrated by Vashti Harrison, whose Little Leaders: Bold Women in Black History is a New York Times bestseller and an NAACP Image Award winner. Cece Loves Science is just right for fans of Rosie Revere, Engineer and What Do You Do with an Idea?, and for anyone who loves to learn.

Kimberly Derting is the author of the Cece Loves Science series, the Body Finder series, the Pledge trilogy, and the Taking series. She lives in the Pacific Northwest, where the gloomy weather is ideal for writing anything dark and creepy. Her three beautiful (and often mouthy) children serve as an endless source of inspiration and frequently find things they say buried in the pages of their mother’s books. You can visit her online at www.kimberlyderting.com.

Vashti Harrison is the author-artist of the New York Times bestselling Little Leaders: Bold Women in Black History and the artist of the Cece Loves Science series. She earned her MFA in Film/Video from CalArts and BA from the University of Virginia. Her experimental films and documentaries have been shown around the world at film festivals. She lives in Brooklyn, NY.

Shelli R. Johannes is coauthor of nine books in the Loves Science series (co/Kimberly Derting), Theo Thesaurus series, Shine Like a Unicorn, and Penny: An Engineering Tale of the Fourth Pig (Capstone, Fall 2022).

She is also the critically-acclaimed author of teen novels (written as SR Johannes) including the Nature of Grace series (Untraceable, Uncontrollable, and Unstoppable), Rewired, and On the Bright Side.

She can often be found on highways and country roads saving strays and other jaywalking critters, or volunteering with animal conservation groups like the Atlanta Zoo, the Dolphin Project, and Bosley’s puppy orphanage. After earning a master’s in marketing and working as an executive in Corporate America, Shelli traded out her heels and suits for flip-flops and jeans so she could follow her passion of writing.

She lives in Atlanta with her pack of animals: a British husband, two kids, one bird, one fish, and two crazy Goldendoodles who hate vegetables.

“Harrison’s clean, bright illustrations add expression and personality to the story. ...this endearing protagonist earns a place on the children’s STEM shelf. A good introduction to observation, data, and trying again.” — Kirkus Reviews

“Cece is a smart and curious girl who loves to get to the bottom of all her complex questions. ...Harrison’s expressive digital illustrations have a lot of energy, color, and motion...A fun way to introduce scientific methods.” — Booklist

“Excited by her teacher’s assignment to find and investigate a question, [Cece] pairs up with a partner, Isaac, to brainstorm ideas...The story includes images of an inviting science classroom and mentions a variety of sciences and a range of scientists diverse in race and gender. ... Words and pictures combine to make smooth blend of entertainment and education.” — School Library Journal